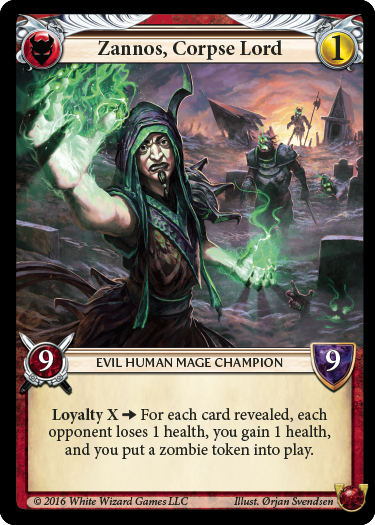 Over the past year, Epic has seen shifts across both the constructed and limited-format metagames. Before Epic Tyrants was released, many played with strategies imported from other card games; Sage and Wild were the go-to alignments for many players. Evil-based decks were lingering, and with the release of Tyrants we saw an evolution in constructed based around Drinker of Blood for a combo-deck victory that the other three alignments simply couldn’t provide. One example is Derek Arnold’s control deck that won an Epic World Championship Qualifier at Origins 2016 with an that used Drinker as his main finisher. We expect that evolution to continue with today’s preview.

We began the official set of previews with Chamberlain Kark. His game-winning Tribute ability is something new to Epic, and his health-gain Loyalty X ability should lead to some Good-focused constructed decks. (Which, some would say, would also be something new to the game.)

We end the preview set with something on the other end of the spectrum: Zannos, Corpse Lord. While Kark-focused decks want to stall things out and build to a large health total to win, Zannos-based decks want to gain a bit of health while applying a lot of pressure to try to bring things to an end quickly.

Zannos is almost everything an aggro-control player wants: health gain, token creation, and direct damage to set up a game-winning play. (He won’t draw cards for you, but you can’t have everything…) I have played him on turn one going second with a hand full of Evil cards to make a 12-point swing. (+6 for me, -6 for my opponent… and also six zombie tokens!)

Even more than the other Loyalty X cards, you will need to have a real commitment to just one alignment to really get the most out of Zannos. But those that give in to the Evil side of things might find a horde of zombies willing to serve.

Here is the last of our preview stories, again written by Ian Taylor:

At the Southern edge of the Pantheon mountain range fell the waters of the Everblessed.  These waters were a gift from Kalnor to the people of Covenant.  The river separated the Deepwood from the desert of the Ahn-Het Forge, and the demons of the Forge could not cross the river as long as it flowed.

The stench of the Everblessed was overwhelming, but Raxxa was above it all.  The mighty Demon had a purpose to fulfill.

“Corpse Lord!” he bellowed.  The words had barely escaped his cavernous maw when, with the suddenness of death, Zannos appeared among the trees at the edge of the forest.  The necromancer walked alone, but the roiling earth surrounding him suggested that he was not undefended.

The two unholy beings faced each other from opposite shores of the holy river.  Raxxa could not cross, and Zannos was too smart to enter the Forge.

“I am not accustomed to being summoned, O lord of the nether-wastes.”

Raxxa’s glare was constant.  He would love nothing more than to pull out the spine of the evil wizard, and throw it over the walls of Covenant, but this was a time for diplomacy.

“We desire the same thing.” said Raxxa.  “The destruction of Covenant.”

Zannos smirked.  “I agree with your goals, though your methods are sub-optimal.  Your rift gate has no power, and your armies are small.  There is also the matter of this river.”

“What kind of world is this, where the land holds no power?  I cannot draw anything from it!”

“I can,” said Zannos.  “It requires nuance to awaken the dead.  I doubt your…lordship…has the touch for such delicate work.”

Raxxa bristled.  The Demon Lord cared nothing for nuance and delicacy, but he would not tolerate disrespect.

“Have a care, corpsemonger.  This river will dry up soon, and thus goes your protection from my wrath.”

“You have knowledge of the Dragonsong?”

“I do.” Most beings couldn’t hear the Dragonsong; many even claimed it didn’t exist. Dragons and priests were said to hear it and use it to interpret the will and whims of the gods. One thing all believers seemed to agree upon: when the song ended, the whatever game the gods played would be over.

Zannos considered this.  “The song will end soon?”

“Very soon,” said Raxxa.  “The river will run dry, and then Covenant will fall.”

“What do you desire of me?”

“Oppose me not, deadlord, and I will leave behind cemeteries bulging with corpses.  But hear this, if I or my demons even see you or your puppets…”

“Worry not, demon.  I will remain out of your way.  I also wish for the fall of the shining city.”  Zannos’ mouth turned into a dark smile.  “Perhaps one eon, you and I will meet in the final battle.’

“Then why attack the city at all?”

Raxxa turned and walked back into the Ahn-Het Forge.  He would not answer the human’s query.  He had no answer, because he had never asked himself this very question.  Why attack the city?

Zannos grinned as Raxxa entered the heat haze of the vast desert.  The Demon Lord knew nothing of puppets.  He would learn soon enough, at the fall of Covenant.

Zannos, Demon Lord is just one of 48 new cards in Epic Uprising. Join us at Wise Wizard Games Fair from November 18 to November 21, and pick up your sets before anyone else!