Today’s guest blog post was written by Nathan “noverb” Overbay. Nathan has played card games competitively for twelve years. He competed in both of the Epic World Championships in 2016 and 2017 as well as the Eternal World Championship in 2019. You can usually find him streaming card games at https://www.twitch.tv/noverb

Hello Epic Card Game fans! My name is Nathan Overbay and today I have the honor to show you a new card mechanic coming in the new Jungle set, live now on Kickstarter! So without further adieu, let me introduce Invoke:

Invoke is an ability found on events that lets you play the card from the discard pile and, when it resolves, banish it.

This ability is a throwback to Lesson Learned, allowing you to play events from your discard pile. Cards with an ability while in the discard pile have always been strong in Epic. Invoke allows you to have playable cards beyond the maximum hand size of seven. The opponent is forced to respect not only what cards you have shown from your hand and what’s in play, but also account for Invoke cards as well. The respect of that power drives players to play cards like Amnesia to stop their opponents from abusing the discard.

Not only do they allow you to play the cards twice, but also after discarding them. Often your opponents force you to discard cards with the likes of Thought Plucker and Knight of Shadows. Invoke gives you an easier choice for those discards since you can play the Invoke card from the discard pile later.

One important note about Invoke is that it will not trigger Ally abilities. Ally abilities only trigger when playing a card from your hand. I wanted to get that out of the way before we dive into these cards.

Let’s take a look at the first of these cards, one you may have already seen on the Kickstarter, Deja Vu: 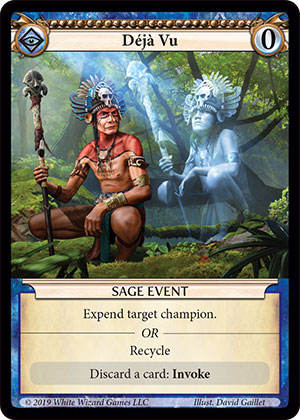 So first thing to note is that it’s a Sage zero. This is a very contested slot in most decks. Between options like Amnesia, Spike Trap, Muse and all of the other powerful zeros in Sage, there isn’t much room for cards that are just “okay”. The first ability alone isn’t super powerful but it does have some interesting applications regarding combat. Without spending your gold you can expend a champion that your opponent was planning to block with. You can even do this after attackers have been declared if your opponent tries to spend their gold to ambush in a blocker. In addition to the offensive applications, you can also use this to expend a potential attacker after their first attack, overall a useful ability.

The next thing you will notice is that the Recycle is not part of the first mode. When you choose to recycle with this that is all you get. Comparing to other zeros that do something and recycle this is definitely a bit sub-par. Deja Vu is actually more akin to gold events in that it has a mode that you would use to interact with the board, and a draw mode. Coupled with the ability to Invoke by discarding a card, this can also do a good impression of Frantic Digging.

My first inclination is that Deja Vu is another way for Sage to discard a card without paying a gold. Alongside Frantic Digging, this is going to be a great asset to decks that want to manipulate their discard pile. Army of the Apocalypse decks will want this as a way to expend two would-be blockers and discard something like a Juggernaut before playing their namesake. Not only is it a discard outlet but it is also a way to get rid of those pesky blockers that can get in the way before you play Army.

I think the ability to re-play it from the discard pile a second time in the same turn is really useful. The blowouts in combat will be real and at worst it Recycles for a better card. I wouldn’t say this is a high pick in Dark Draft. It is a lower pick than a zero cost champion but still higher than a lot of gold cards. Deja Vu is definitely more than it seems at first glance, I’d watch for this one in both Constructed and Dark Draft. It’s gonna take some time to feel out how strong this card really is.

Deja Vu isn’t the only new card I have to show you. Take a look at Commune: 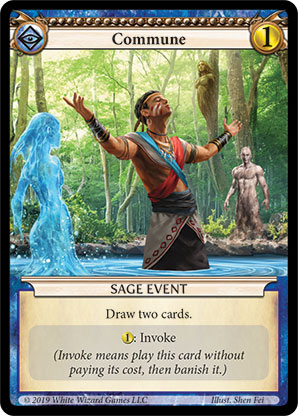 The first thing you may notice is that this is very similar to a card that sees a tremendous amount of play, Ancient Chant. A Sage Gold that has no modes other than Draw Two and an ability from the discard? I can see the family resemblance! However, while these cards are very similar they have key differences.

Ancient Chant draws a lot of its power by being able to draw a card when you recycle it or when your discard pile is banished. The ability to recall Ancient Chant allows you to draw a card while also returning Ancient Chant to hand, effectively drawing two cards. This is where the key difference lies. Commune will draw you two new cards, not one. For example, Ancient Chant being returned to your hand doesn’t increase the likelihood that you draw that Hasty Retreat you need to stop the lethal attacker. Commune will get you one more card closer to the answer you need for the board right now.

I foresee a spot for this card in Wild and Good decks without a lot of recycle that need decent draw outlets. Without recycle to take full advantage of Ancient Chant’s ability, Commune will be of greater importance to fuel the player’s hand. Playing it twice allows you to keep your hand stocked without using the Draw-Two mode on more situational cards.

Commune will also be very playable in Dark Draft (DD) for the same reasons. Draw Twos are fantastic in DD. You may find yourself in a spot where none of the cards in your hand draw cards. A Commune in your discard could mean the difference between refilling your hand or no plays on your opponent’s turn. I believe Commune will be a reasonably high pick in DD. I’d pick it above cards like Divine Judgement but below the strong Zeros.

We have one last card to spoil today, say hello to Makeshift Mutation: 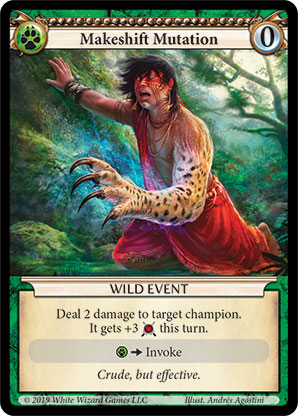 There is quite a bit to unpack in this card, Makeshift Mutation is a swiss army knife. Dealing two damage to something falls in line with Wolf’s Bite and Flame Spike. While this card does not Recycle, a definite downside, dealing the damage isn’t all that it does. It can also pump a unit to push extra damage to the opponent or make your smaller Champion trade up.

I would have liked this card without the Ally ability. Being able to Invoke it when you play a Wild Gold is just fantastic. Invoking it combines well with the damage of a Fire Shaman, Smash and Burn, Fire Spirit, or a burn Event like Rain of Fire. As we’ve seen with Smash and Burn, this kind of effect is a great source of pseudo-card-advantage that allows you to string together extra value. This is especially true considering you can play Makeshift Mutation, spend your Gold, and then Invoke Makeshift Mutation on the same target, essentially making it four damage.

The interesting question to ask is when will you be using the Invoke to target your own Champion? It would have to be a scenario where either:

So what I take from this is that Makeshift Mutation is a great modal card with not a whole lot of cost associated with playing it. You are more than likely going to be using it for its damage mode than the offense. However, the tease of the other mode, combined with Invoke, is enough to make this compete well with the likes of Wolf’s Bite and Flame Spike. And I’m talking about in constructed. This is a solid A+ in draft. I’d pick it in about the same tier as the aforementioned cards, slightly lower than strong Zero Champions like Ankylosaurus and Dark Knight.

This has been a spotlight on the new Invoke mechanic which you can back right now on Kickstarter! Keep your eyes peeled for more spoilers from the set!