This is a guest blogpost by Josiah Fiscus. Josiah Fiscus is a 32-year-old gamer from Pittsburgh, PA who has been playing CCGs and designer board games for over two decades. When he’s not at the game table, you’ll find him playing drums and serving as a deacon in his local church or enjoying time outdoors with his wife, Erin, and two kids (ages 6 and 5).

Okay, you may have already seen Scara’s Will spoiled (albeit with a slight tweak to its ability). But it would behoove us analyze it in some more depth today. You see, it turns out, we have another as yet unspoiled card to compare it to. Read on. (Oh, who am I kidding, you already scrolled down to look at it.) Back? Okay good, let’s talk Scara’s Will.

First of all, let’s consider limited. As a “draw 2” effect, it can never be anything worse than good. Even if you get this in a Random 30 list with no other Evil cards, it’s still quite playable just for the card draw. But the utility of the second option is strong too, even you can’t make use of the gold refund. If your opponent has only a single champion in play, this card will break it, even if it is untargetable. We’ve all seen the power of a card like Lying in Wait to deal with a Sea Titan or Steel Golem. This card can serve that same function while not even requiring the champion to attack. And, of course, if you can make use of that extra Evil gold, effectively performing this effect for free is downright unfair.

From a constructed standpoint, Scara’s Will wants to slot into a deck that is heavy in Evil cards, much in the same way Brachiosaurus needs heavy Wild to be at its best. This is just not a card you will simply splash. But I’d argue that it’s actually even stronger in constructed than in limited due to the ability to build around it. For example, consider targeting yourself with this effect in order to break your own Soul Hunter for free. Or consider being able to get multiple triggers from Evil ally cards like Plentiful Dead in a single turn. Moreover, it should be easier for a constructed deck to avoid the situation of wanting to play the second half of this card while the opponent has a token in play alongside their champion you really need to kill. Especially since Evil is already great at dealing with tokens. 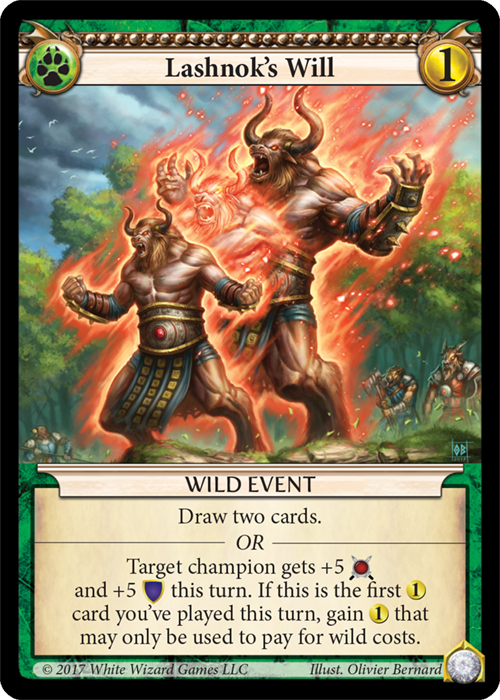 While you might not have guessed it just from seeing Scara’s Will, this card probably tips you off to the fact that there are more of these to come. An indeed, I am able to officially confirm for you that the “Wills” are a cycle of cards, one in each color. Let the Sage and Good speculation commence.

In limited, as above, “draw 2” effects are always valuable. However, the second part of this ability is not as universally useful as Scara’s Will. Remember the example above, where Scara’s Will could be used to deal with an untargetable champion, which is well worth spending a gold on even if you can’t take advantage of the Evil refund. But there are likely to be far fewer situations where you are willing to spend a gold for a +5/+5 boost. So it is more important that you draft heavily in Wild for Lashnok’s Will. Compared to a card like Rage, which forgoes only +1/+1 to grant Breakthrough and always is free, Lashnok’s Will is likely to be a lower choice.

That said, from a constructed standpoint, the existence of Brachiosaurus has already incentivized players to build Wild decks that can take advantage of these multiple triggers. Just remember once your Fire Shaman is in play that you need to play your Lashnok’s Will before you play a Brachiosaurus due to the final clause on these Will cards. It’s also worth noting that no other event card in existence gives this much of a boost to attack and defense for free. If you can take advantage of the gold, this card can be quite a nasty combat trick or surprise lethal damage. Finally, for deckbuilding purposes, this is a 1-cost card (even though it can often function as a 0). That makes it significantly easier to fit into constructed decks as it has none of the prerequisites that a 0-cost card like Rage does.

Finally, let’s rejoice with our Minotaur friend in finally having something good happen to him. This may well be the first event in Epic history that features a Minotaur who isn’t about to be destroyed. We all deserve to catch a break every now and then. Thanks, Lashnok!