Can you define your role?

As Digital Product Manager, I assist in communication between the digital and physical team and feature prioritization. I also lead the mechanical design on the two new physical sets, Duels (a beginner friendly Epic set) and Jungle. I also fill other roles, working at conventions, programming internal tools, and assisting other teams on their development whenever possible. I’ll be at PAX East!

Epic Dark Draft format seems to be the most popular. Why do you think that is and what do you like about it?

Dark Deck is really different. In most card games, you can’t play every card you pick. In Epic, every card is playable because there are no mana cards. Instead, you choose whatever card plays best in your deck. You also play against the person you draft with, so you have a lot of influence over how they play. First, you each draft one card from a secret hand of five cards, passing the remaining cards to your opponent. Then, you both draft two of four remaining cards, ‘burning’ the rest.

Dark Draft gets its name because, while you can speculate, you can’t be certain about their actual choices; you’re in the dark about their picks. If you’re getting passed a lot of strong Wild cards then you can guess that your opponent is on a different plan. 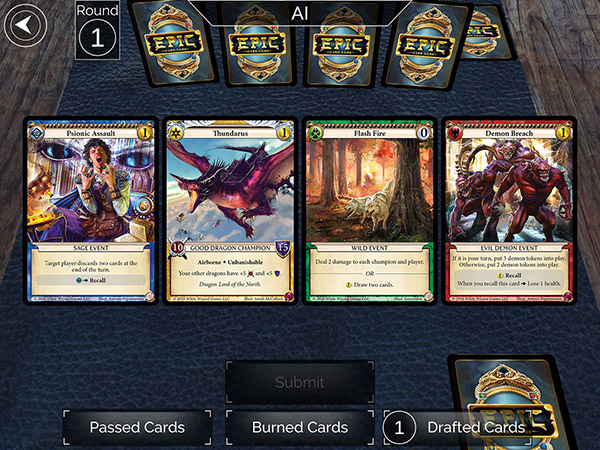 What special goodies can you get in the App? Like Avatars, Etc.

Foils can be played in all formats. For example, if you have a foil and you draft that card, it will be a foil in your draft deck. You can also change your avatar and Battle Board. Your avatar is in your frame while you play. Battle Boards are your half of the field.

Arena is a special week-long format. Each week, the format changes and you get a free run. Each game you play earns you in game rewards like foils, and your run continues until you lose. Arena sometimes has special formats like random 60, where you build a 30 card deck from a pool of 60 cards.

Do we offer any real-life prizes?

Yes! Arena winners (most wins and/or best streak) receive a Gold Ticket, which they may spend to participate in the Epic Digital Monthly Championship. The Championship winner gets $500 cash!

How do we accommodate new and experienced players?

The app is designed to assist new players by smoothing over the nuances from the physical game. It gives you a warning when you try to do something that probably wouldn’t make sense, like ending the turn if your opponent has spent their gold and you haven’t. It highlights available plays and you can interact with the keywords on a card you’re looking at for more information. When playing against the computer, you can enable the tip mode in the top right for suggestions. There are also different game modes for different types of players. New players tend to prefer the async mode and the random card modes while they learn the cards, while more experienced players tend to play real time Dark Draft or Constructed.

We try to connect with the fans and create a product based on what our community says. The alpha community has a huge voice in our creative process. As far as games go Epic has super fans. I am really proud of our community. 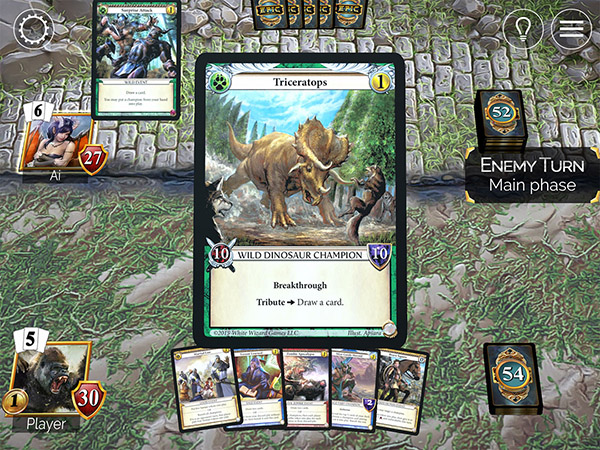 Looking back on the creative process, What do you think your favorite part was?

I personally love designing new sets. Pushing new cards and seeing if I can break them. Playtesting is the most fun.

How many games of Epic Digital do you think you have played?

Oh, I have no idea. Conservatively probably hundreds.

What is your favorite faction and card?

What are you most excited for players to experience in the app?

Dark Draft is something that people don’t have in any other game. Dark Draft is really elegant and fast, I think it is what fans will love the most.

Can you explain the best strategy to win?

You win by reducing your opponent’s health to zero ;). You can also win by drawing a card while your deck is empty. It doesn’t happen very often, but it does put pressure on your opponent to start attacking.

In the campaign, is it trying to teach you a new lesson each chapter?

Yeah it is. At one point at the campaign, you may think being super aggressive is the best strategy, but in other games that simply won’t be the case. It really encourages different forms of gameplay. 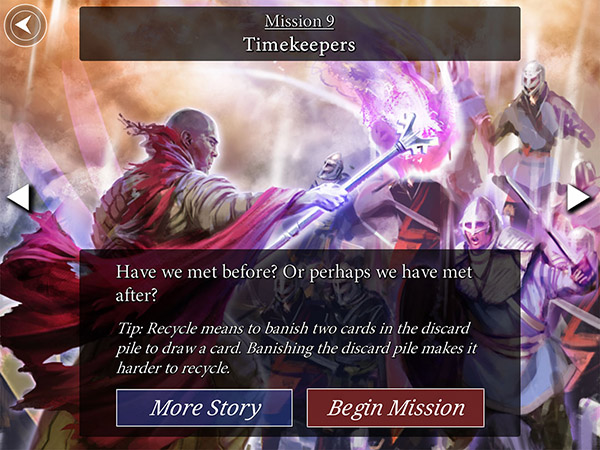 What makes Epic a different kind of TCG app?

You get everything for free. This is different than all other TCG’s because it eliminates the grind to earn cards. Also, it means you won’t lose a game because someone has an overpowered card that you can’t access.

You can’t get mana-shorted or get mana-flooded because the game doesn’t use mana cards. It just starts full throttle. Any card is playable right from your first turn, instead the game is about choosing what to play each turn.

You can also play offline against the AI as well as the campaign and it will sync your progress once you are on WiFi.