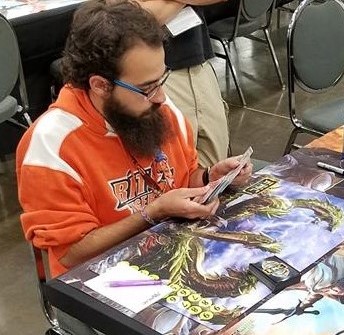 My name is John Tatian, I’m 20 years old and I live in Natick, Massachusetts.

I started playing Epic in January of 2016 thanks to my friend CJ. My first strategy card game was Magic: The Gathering, which I have been playing for about nine years.

I play Epic pretty frequently whenever I’m at home, but not much while I’m at school. I played a ton of Epic at Origins, which was awesome! Yes, I have a group to play with and we test both constructed and limited, although more constructed because we find it more difficult to master.

No I didn’t mulligan my card list because I had 16 wild cards, including Raging T-Rex, Surprise Attack, Strafing Dragon and Wolf’s Bite. Also, I initially thought that my evil was quite strong and I had Muse as well as a Drain Essence. I quickly determined about 25 out of the 30 cards to put in my deck and spent the remaining 25 minutes on the last five cards or so.

The card I want to see most in my list is Muse because it is not only insanely powerful, but essentially free to put into any deck. I also really like the bounce spells (Erase, Temporal Shift and Sea Titan). Lastly, I like to see Drain Essence. My pool for this event had both Muse and Drain Essence. I think these cards are all very powerful in the limited environment.

My favorite play during the tournament came during the very first turn of the finals. My opponent led with a Rampaging Wurm and attacked. I didn’t have a removal spell or bounce spell, so I played a Shadow Imp, blocked the Wurm, and then drew two cards with a sage card to return the Shadow Imp to my hand, effectively blanking his attack. I then removed the Wurm during my turn.

I was happy with my random 60 deck because it had a lot of individually powerful cards and strong wild synergies. My best advice for dark draft would be to pay attention to loyalty cards. Some of the most powerful cards in the game have strong loyalty 2 abilities, but they often become much worse if you don’t draft enough cards of the same alignment. At the same time, you still want to take individually powerful cards; so finding a good balance between power and synergy can be difficult, but it pays off big time.

I plan to play as much Epic as I can between now and November. I will try to put together a good constructed deck and also master the limited formats.

Don’t give up! I lost in the finals of my first two qualifiers before winning the third one, so I know that it hurts to lose. If you keep trying hard enough, you’re bound to succeed!

Thank you!! I can’t wait for the championship!!