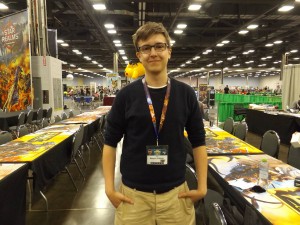 My name is Hampus Eriksson. I live in Stockholm, Sweden, and I am 22 years old.

I started about a week after I saw the announcement of Epic World Championships through Adrian Sullivan’s Facebook page, which was at the start of March.

My first strategy card game was Yu-Gi-Oh back in 2005 but I didn’t start playing competitive card games until I won the Swedish National Championship in Pokémon in 2009. I then won three more years in a row and have competed in Pokémon Worlds from 2009-2015 (except for 2013). I am also playing The Spoils, where I am the reigning world champion.

Usually about once a week. I’ll bring a pool of cards to either school or our gaming store and do some dark drafting.

I started playing with some friends but I wouldn’t call us a testing group. All of us have been playing other games but we wanted a new fresh game to try so we tried out Epic.

Talk to us about your deck. Why did you choose the deck you did? What were you trying to accomplish, and how happy were you with your deck’s performance? What were you expecting the rest of the tournament to use? Was your deck specifically trying to beat an expected field of opponents, or were you just trying to do one specific thing ignoring what other people were doing?

I had quite limited testing in constructed going into Origins. We knew a Wild based burn deck could win really fast, which turned out to be played a lot. We were also trying out a token combo deck but gave up on it because it exists a lot of cheap counters (Blind Faith and Wither for example).

I didn’t play in the first constructed qualifier so after looking at the top decks from there I decided to play Chris Weidinger’s Sage-based deck with lots of discard (which I love). It could get your opponent down to no cards really fast or just outtempo your opponent with Surprise Attack+Kong.

What do you think is the most important card or interaction in your deck, and why? What were you most afraid of facing during the event? Would you change anything about the deck if you were to use it again?

Helion, the Dominator was the best card in the deck. It can either be really aggressive or it can remove champions with the help of Elara, the Lycomancer.

I was most afraid of the fast Wild decks as I felt like my deck would win most long games.

Time Bender didn’t perform that well and I would probably drop it if I were to use the deck again.

It was in the finals. I was holding onto 2 Fireball in my hand because I expected an Angel of Mercy. A couple of turns later the Angel came down, and immediately got broken.

Keep drafting every week and talk to people online.

Play as much as possible before the event so you have knowledge of all the cards. If you are playing in a constructed event make sure you have looked at what decks have performed well before so you know what to expect. And try to attend an event with low attendance.