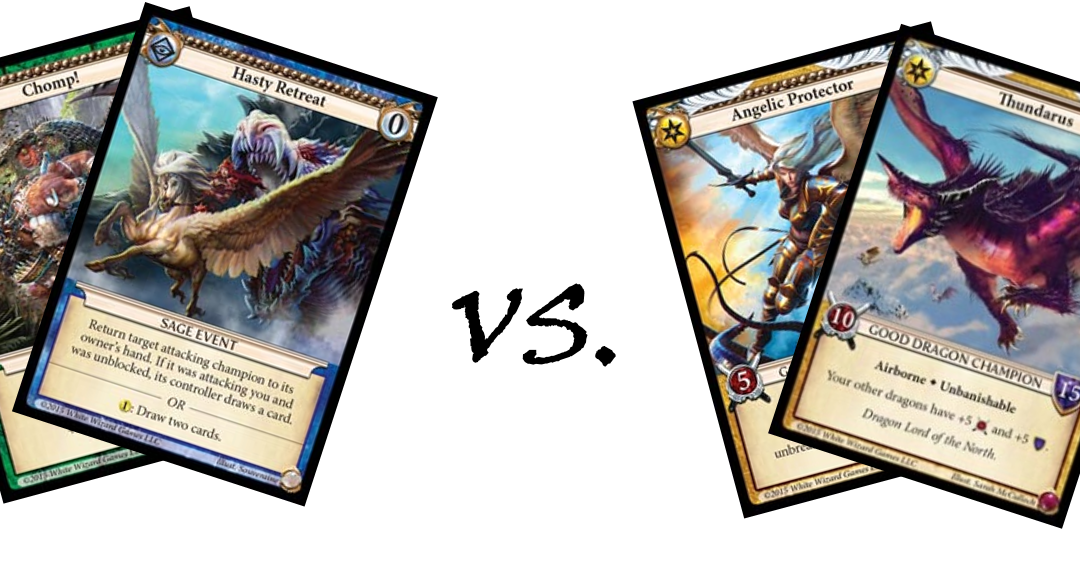 This is a guest blogpost from one of our fans, Ryan Whynot.

Hi, my name is Ryan Whynot (yes that is a legit last name), and I stumbled across Epic one day at work when a colleague was showing me a web article. I noticed a link on the side bar which led to the Epic website. I was immediately hooked, and I felt I had to get this game. I watched Rob’s intro/tutorial video and became even more excited. I shared the website with my friend, Chris, and he also was immediately hooked. Chris and I had both played Magic for a while, but recently had fallen out of it. Epic seemed like a nice replacement, as it addressed some of the problems we both disliked about Magic. Both Chris and I didn’t like how games of Magic could be easily won or lost due to one player not drawing any of their lands. In Epic, each player gets 1 gold at the start of each turn, so you are guaranteed to always be able to play your cards.

Recently, we finally got the chance to log some hours of constructed play. Below are our initial lists that we each came up with separately, and they were the decks we used over 6 games. We plan to continue to modify and update our decks. This article will contain observations from our games purely based on the below lists, and potential changes and reasons to support them. 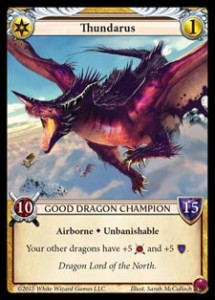 Let’s start off with the obvious. Thundarus is huge. I feel Wild is the alignment that will have the hardest time dealing with him, simply because of his 15 defense. Your best single-target damage abilities in Wild are Chomp for 12, or Kong’s tribute ability for 13. Other than that, if you’re playing Wild, you’ll have to get something airborne in front of it and then buff its brains out in order to have a chance at killing it. For this reason, I have a feeling that mono Wild constructed decks may be difficult to pull off. Now that doesn’t mean that Wild decks will never see constructed play, it just means they need something paired with it if Thundarus runs rampant in constructed.

Enter two of my favo 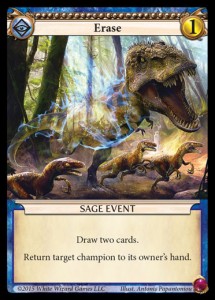 rite cards in the set: Erase and Hasty Retreat. Just these two cards alone already give you twice as many answers as there are problems, meaning chances are you’ll draw one of these cards before your opponent slams Thundarus. Now I know bouncing Thundarus doesn’t permanently deal with him, but it does help control the board. One observation that Chris and I both made was that as long as champions weren’t in play, it didn’t really seem to matter where they were. Because players only get 1 gold each turn, bouncing Thundarus effectively undoes your opponent’s last turn. Combo Erase and Hasty Retreat with Memory Spirit, and you have a possible total of 9 Erases and Hasty Retreats. Add in Sea Titan and you have a full dozen possible ways to send a big champion like Thundarus back to it’s owner’s hand.

Keeping Thundarus expended also seemed to be an OK way to deal with him as well, but harder to pull off. This is where I had my fun with Sneak Attack. Sneak attacking in a Frost Giant when Chris would attack with another champion before attacking with Thundarus proved quite effective. Even doing that when Thundarus was the one attacking, being able to lock down his whole board at event speed like that, was great, especially if he had the deadly duo of Thundarus and Gold Dragon.

Final Task, although it looks great on paper, didn’t play out as well as I thought it would. Maybe it was just this matchup, but it feels like the best way to remove champions is either to banish or return them to their owner’s hand. Both methods leave no room for Final Task. In addition, I found myself mulliganing it more times than I actually used it. Game 4 I believe it was, my opening hand contained 2, both of which I pitched. For these reasons, I believe Transform would be a better choice for the deck. Transform will hit Thundarus every time, unless they target it with Priest of Kalnor. In that case, good luck removing it that turn.

Without having a meta to go by, it’s hard to say whether or not a card is needed in order to deal with a certain deck archetype. A card like Flash Fire would be very weak in this matchup. Against a token deck it might do better, but I don’t feel it’s worthy due to most of Chris’s champions having 3+ defense. 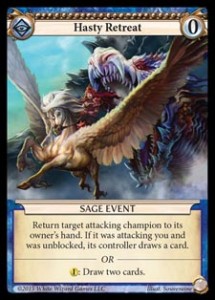 So far from my constructed experience, Sage seems to have some of the strongest cards. I feel it would be difficult to build any deck without strongly considering a few powerful, controlling Sage cards, but maybe that’s just how Chris and I feel. After reflecting back on our Games, Chris immediately regretted not using a third Hasty Retreat. Hasty Retreat was the clear all star in most of our games, and it costs 0! The downside is that if you use 3 Hasty Retreats, you need at least 6 other Sage cards that cost 1, but Sage has plenty of good 1 cost control events or champions that it wouldn’t be hard to pick. In the end, Chris and I won 3 games each. We will be getting together again soon to test out revised lists and new brews that have been bouncing around in our heads.

I would love to hear your feedback on our experiences and these deck lists.