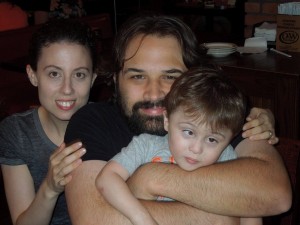 My Name is Thomas Dixon, and I am 32, living in Bethel, Connecticut.

I picked it up for the first time in May of 2016. Darwin linked to an announcement of the World Championship.  I drove to the store and bought the game because I knew that it would end up being free once I qualified,  with an opportunity to advance that investment even further.

My first strategy-based card game was Magic: the Gathering. As an avid Sports Card Collector I walked into a store at the age of 9 and saw a bunch of booster boxes. Picked up one and immediately wanted more. The artwork was interesting and I could actually do things with the cards! I have played most gaming systems that have come out in the last fifteen years or so, focusing now mostly on Epic Card Game, Vintage Magic: the Gathering, and deck builders like Star Realms or Emergent’s Genesis.

I goldfish my constructed decks daily, setting different parameters for what the opposing goldfish can do depending on what I want to learn about the cards or deck I am testing out. I try to build a new deck at least once a week and try to use different cards as well, so as to prevent my designs from becoming stale and to ensure that my testing is fruitful. I try to set up Dark Draft sessions regularly with Jonah Acosta and other members of Pluck You! (An assortment of card players from various games) but life often gets in the way and so it’s unfortunately only once a month that we get any repetitions in there.

I chose to play Trix, as dubbed by its creator Rich Shay, because I felt that it was on the next level of deck building.

We built a deck that targeted Sage/Wild Tempo/Discard specifically while also acknowledging that other archetypes could and would pop their heads up, namely Targeted Damage (Burn) and Tokens. We felt strongly that Blind Faith was the best card in the game and had to fill out the remaining Good slots with cards to make our deck legal. We love Urgent Messengers, but have been split on the remaining slot(s) between Divine Judgment and Inheritance of the Meek. The trade offs of the cards are pertinent in every match up so there is no definitively correct answer.

To me, the expected meta (the decks we expected other people to be playing) presented at what we decided was level 0 (perceived best deck in the format), the raw powerhouse deck of Sage/Wild Tempo/Discard. Every Magic player that built their first Epic deck would always immediately be attracted to that pairing and its strengths. Cards like Plentiful Dead, Inner Peace, Psionic Assault, Necrovirus, and Soul Hunter were included to turn the negative aspects of opposing Thought Plucker, Knight of Shadows, and Psionic Assault into strengths while also ensuring that we had meaningful plays on every turn of the game. Of course, we also included those same cards we were aiming to defeat because of their power level in the game and the leverage they provide against themselves and decks that were not adequately prepared for them.

Our biggest concern was that the deck might take too long to win a game in the Swiss portion of the event and so we developed specific plans on how to close out games. Several spots could easily be flexed into more aggressive ones, like adding more Necromancer Lord, Angel of Death, or things of that nature but we wanted to keep Loyalty requirements to a minimum.

The way you have the most agency in your result is through Constructed. Identify the meta, then build to attack it. Don’t just copy someone else’s list, understand the design choices behind it. Have concrete plans for the two or three strongest decks you plan to see, and make sure you can actualize those plans. Variance exists in every game, but the most control of your finish will come from the Constructed format.

In my opinion, Dark Draft has more variance. I’ve hit one strong card, four weak card hands in a Dark Draft and been varianced out of the match. Otherwise, I love the heads up nature of the format and how player skill and style play such key roles.

Sealed is structured very well and the better player almost always wins there. I’ve never heard someone say that they couldn’t build a competitive deck out of their pool before. The mulligan feature really helps there as well.

Additionally, all of Thomas Sorenson’s Epic content is stellar. I’d spend time to internalize the things he is pointing out as they play a critical role in how games play out.