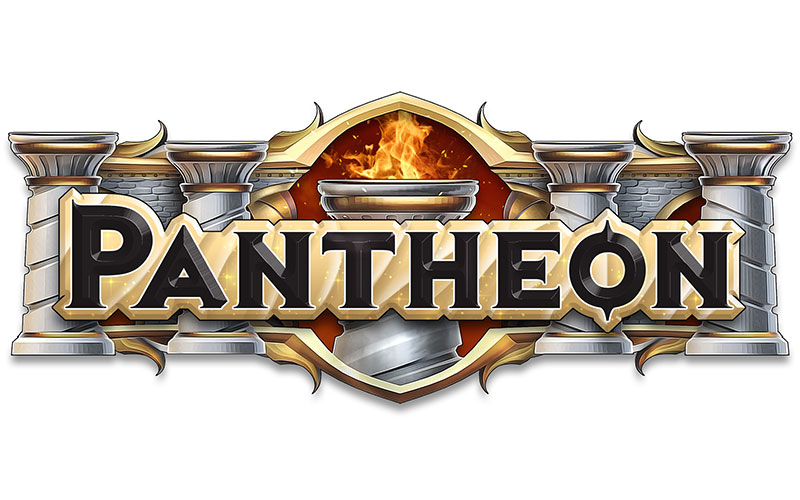 Oh boy, my first spoiled card of the new set, Pantheon. I am very excited to bring everyone a new card to talk about, and boy is it a fun one. Despite the dominance of Good in the past year, thanks to some card bans and other cards spoiled from this set, it looked like Good was on its way out. Then comes a card like this and brings it all back. 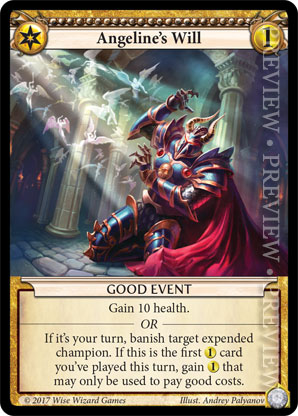 It’s hard not to compare this card to our other 10-health joy, Inner Peace. 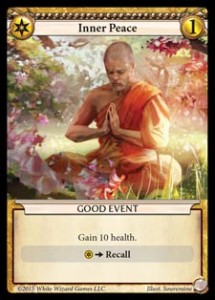 They are both Good 1-cost cards that allow for some massive healing. However, where Inner Peace gave you a good thing to drop from a Thought Plucker or Knight of Shadows, and allowed for a stalemate easy play to keep playing Good cards and get it back from the discard pile, this card gives us some other options.

Angeline’s Will, that sweet Angeline, also reminds of Brachiosaurus, another card that really made its alignment shine. With playing Brachiosaurus, you put a body on the board, and it allowed you to still have Gold left over to spend (even if it is just on Wild cards). It encouraged more thematic and alignment-favoring deck building, and with the advent of the Uprising cards, people were finding that heavily investing in certain colors could really pay off. (Anyone that has faced a Scarros burn deck will attest to this.) 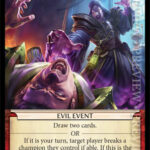 However, the most obvious comparison to this new card (I promise we shall get to it), is actually another card from Pantheon that was already spoiled: Will of Scara.  As you can see, this was another 1-cost card that gave you two options, where one of which was to force your opponent to break one of its champions, but allowing you to retain your Gold in the Evil alignment.

So, finally, Angeline’s Will. Besides that wonderful 10 life gain that Good loves to use, we now have an option for some sweet removal. And not just any removal, banishing removal! That paltry Will of Scara gives your opponent the option of what to break, and when you do, it goes into the discard pile, where it could be brought back with a Final Task or Army of the Apocalypse, or used with a Recycle trigger for card draw. Not so with Angeline’s Will! That target is straight up Banished!

Now, this card is not without its faults. For one, you can only target an expended champion, so most likely you would have been hit last turn for something. Also, you have to target the champion (unlike Will of Scara, which requires only the player as the target), which means no removal of that Sea Titan or the new Steel Titan. However, if you satisfy those conditions, and let’s face it, you will a lot of the time since if you haven’t noticed, Good likes to take a beating and then heal afterwards, you are treated with another Gold that has to be used for other Good cards.

That last part is huge. Removal cards that give you something else are very big. Cards like Erase and Kong have both been staples in many decks, and will continue to be powerful. This card actually gives you more flexibility, even if it is only within the Good alignment. Remove that pesky solo champion your opponent has, and then pass initiative. If you opponent plays nothing, then you removed a threat with only one card, and now your opponent will most likely have to spend gold first on your turn. If your opponent spends their gold in response to Angeline’s Will, then you have the option to punish them right back. Play that Gold Dragon or Avenging Angel and sweep in for damage and health gain. Or if they played a champion, play that Palace Guard and remove their champion, while creating board presence of your own. Or just draw more cards, which is always helpful.

Angeline’s Will allows for a lot of flexibility for Good decks. I could easily see this card see some competitive play. And honestly, I think it will see a lot of Limited play as well. I think this card gives you more options than Inner Peace. You could play Inner Peace, and if you happened to draft more Good, it could be amazing. With Angeline’s Will, you can still gain that same health, or you could also have removal, which is very important in Limited. Plus, if you have more Good cards, you can benefit even more. Even if you didn’t draft more Good cards, it would still probably work as a bluff, as a lot of opponents would still rather not spend their Gold first, for fear you have another Good card in hand such as Gold Dragon or Avenging Angel.

I also can’t help but notice that Angeline’s Will does have that clause that it has to be the first Gold spent on a turn if you want the help of the extra Gold for Good cards. So you can’t use multiples of this card to remove multiple threats, and still retain Gold. Even though Brachiosaurus could do it for Wild, maybe this was just too powerful. I look forward to other, more smartest, intelligently, brain-full players to explain the inevitable brokenness of this card otherwise.

Oh, and do you see that art? That obviously Evil knight is being attacked by hundreds of tiny angel pixies. That is both hilarious and Epic at the same time. I love it. I want to have a superpower be the ability to shoot angels from my hands at my enemies. “Hello sir, do you have any idea of how fast you were…”- *angel pixies in the eyes*. “Mr. Minnigh, I hate you with all the fury of…”-*angel pixies*. Ah, the joys it could bring.

So that’s the end of my reveal. I hope you enjoyed it. Is your mind racing with possibilities like mine? It should. Pantheon is looking to be quite the amazing expansion, and I can’t wait to see more! Thanks for reading, and happy gaming!

Editor’s note: Scara’s Will has been changed since our preview this past summer. The “Will” cards all work in a similar fashion.