It is my pleasure to bring some spoilers from the remaining two packs from the Epic The Card Game: Pantheon expansion! We have been clamoring for news ever since Pantheon was announced, and I am so excited to finally get my hands on the final two packs. Shadya vs Valentia and Riksis vs Tarken are the final two packs, and they give us 24 new Epic cards to add to our lovely collection! These packs will be available to those lucky enough to attend the Origins gaming convention in Ohio. But don’t worry, they will be available to retail probably in July, so that’s right around the corner.

These last packs do not bring the game-changing cards like Chamberlain Kark, or the giant, unblockable champions. These packs help bring a wide variety of cards to help round out the set, which I think is perfectly fine. There may not be a bunch of new abilities or keywords, but the cards have the abilities we all know and love, and have combined them in a lot of unique ways. This helps this set be familiar and thematic to veteran players, but more importantly will not bring in complexity creep that may drive away new players, like some other games do. There are some Kickstarter exclusives that are finally made “legal” (one from each color, but with new art!), and some of the most beautifully drawn cards we have to date. And of course, there are a bunch of new cards with which to smite our foes and slam on the table in Epic fashion. In the first four packs of Pantheon, we had some themes going on; such as giant unblockable champions, the “Will” cards, and new draw 2-and cards. In general, the theme I get from these two packs are an invasion of flying units (although you draw 2-and fans will get some love as well). This pack adds a bunch of fliers that are really gonna shake up the Limited meta I think. For this initial announcement of the set, however, I am not going to talk about any of them (just a little tease to tide you over), but rather a mix of 0-cost and 1-cost cards, one from each faction.

In general, I think these packs help bring the rest of the Pantheon expansion together in a wonderful bundle that does everything a expansion should in a game. I hope you enjoy them, I know I have.

First up is Zaltessa’s Fire:

This of course is a 0-cost Wild Event, with a pretty typical Wild ability of dealing 3 damage to a target champion. This is great to take out many other troublesome low-life champions such as Muse, Thought Plucker, or Guilt Demon. It also has a very fun 1-cost Recall ability where when it is recalled, you deal 2 damage to each opponent. Besides being extremely good in a multiplayer game, I actually have found it very useful in my Limited Dark Draft matches. It behaves similarly to Scara’s Gift, except you don’t need to have Evil cards to help get it back to your hand. I have found it to be a great card to help whittle down an opponent’s life total, and an easy thing to do if I, for some reason, have found myself unable to play something off-turn. I think this card could possibly find its way into a control Evil/Wild deck with some direct damage finishers. Could be fun!

Second up is Rise of the Many:

I have always been a sucker for themed decks, and the Human Token theme has always intrigued me. There is something so satisfying about filling the board with a huge army, and wiping your opponent out. In the past, it has been difficult to pull off, but this card could help bring it back. This very simple texted card does so much. ALL of your 0-cost champions gain +3 offense and blitz this turn. This helps all of your free dudes (not just human tokens), so if you wanted to boost that Dark Knight and some Demon Tokens, go right ahead! You have a Muse out as well? Don’t worry, this will help her too! And then, to add on top of this, you get to draw 2 cards! This is what really sold the card for me. I love draw 2-and cards. Every one of them is amazing. In Epic, you need to maintain your hand size, and although the secondary ability of many events can let you draw 2 cards, it’s cards that let you draw 2 cards AND do something else that can really help get you ahead in a game. What is also amazing about this card is that it does not require any loyalty or any other dedication to Good. This card can go anywhere where you have a bunch of 0-cost champions and it will probably shine. This card will also be a pretty easy draft choice in Limited, considering its flexibility. Plus, I really love the art on this card. It shows so many different characters on it, many of which are represented as 0-cost champions. I love it when a card matches its ability with the art.

Speaking of 0-cost champions that could benefit from Rise of the Many, we go into Evil with Carrion Demon: 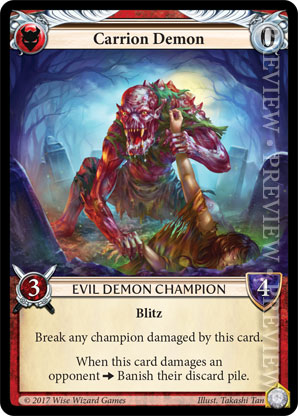 My immediate thought upon seeing this card is a comparison to another venerable Evil champion, Thrasher Demon. They both have blitz, both have similar stats, at least starting out, and they both break any champion they damage. Now while Thrasher Demon can keep growing until your opponent is forced to spend gold to get rid of him, this little guy provides a much more useful and disruptive ability. He gets to banish an opponent’s discard pile! Discard pile manipulation is a huge thing in Epic, as it can really control an opponent’s options when it comes to recall abilities or retrieval, and it completely stops easy card draw with recycle abilities. In Limited formats, the lower deck size can lead to outright wins when an opponent draws all of their cards, but this card can halt that. It practically demands a block, and almost everything that blocks it will get broken, unless they manage to become unbreakable through another ability. It’s another relatively simple card, combining stuff that is already in Epic, but together makes a great new card to play with. My only problem now is how to decide which 0-cost Evil cards I want in my decks, as there are so many great ones to choose from!

Last up is a Sage card, and one that could shake up the meta the most: Shield of Tarken. 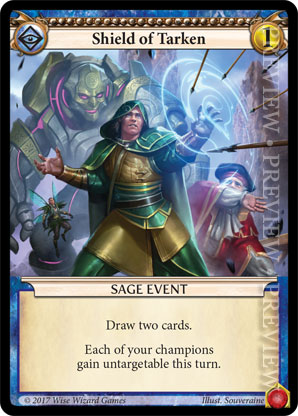 I have already mentioned how important draw 2-and cards are in Epic, so this already comes with those same benefits, not to mention have the pack’s namesake. Each of your champions gain untargetable this turn. That is a game-ending ability, especially in Limited formats. If you have some board presence already in the form of an army or even a hard-to-get-rid-of target such as Brak, Fist of Lashnok, playing this card can negate most removal in the game. Sure, wide sweepers may be able to get you, but in Limited it is less likely your opponent will have them. This is one of those surprise cards that will win games. Cards like Demonic Rising and Deadly Raid are both solid picks in a Dark Draft game, simply because they can be a surprise way to beat your opponent, and this card helps that as well. Not only that, but since it is a Sage card (an already sought after faction in Limited), it can help pay their various powerful Loyalty costs.