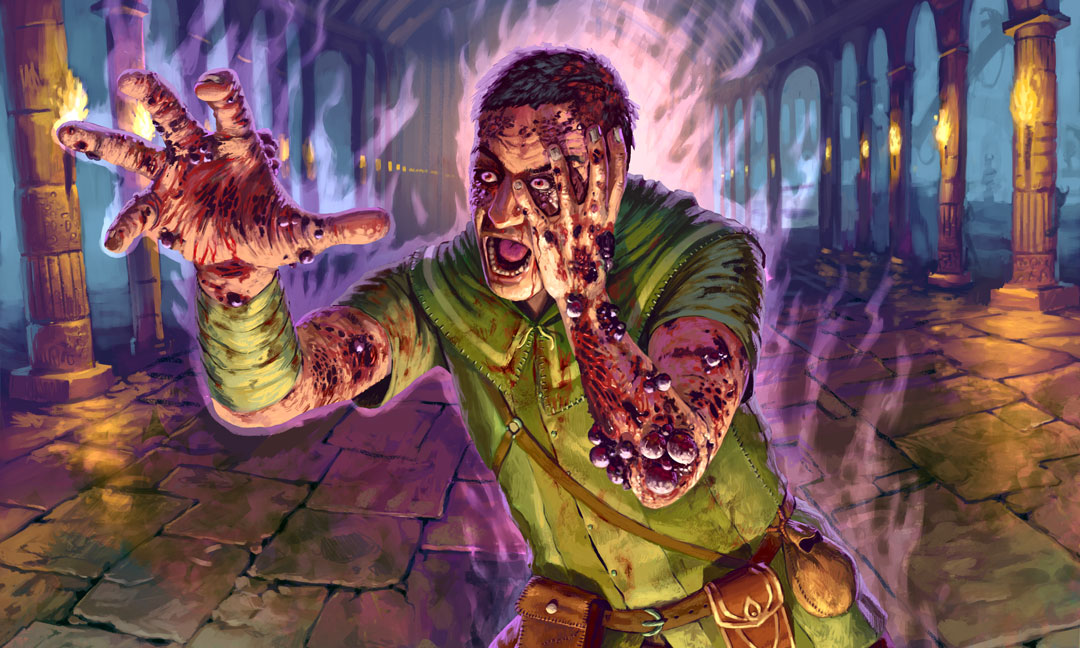 In this guest post, two Epic players, Ben Sullivan and Nathan “noverb” Overbay discuss how they created their Epic deck lists for the Origins 10K event and the challenges they faced during the tournament

I’m Nathan “noverb” Overbay. I have played card games since I was a teenager. I competed in both Epic World Championships, notably placing 16th at Worlds 2016. You can follow me on Twitter @natoverb and at https://www.twitch.tv/noverb. 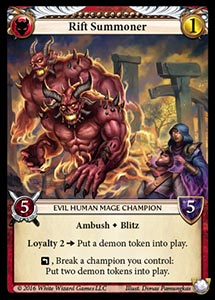 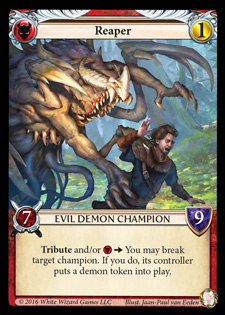 Ben: Personally, Origins went fine. I was confident in our constructed deck selection, barring some wild unforeseen brew. I thought going into the tournament that we were the most prepared team and that proved to be accurate throughout the tournament. We correctly identified the biggest player in the meta and, our deck, Gift Horse, was really set up to take advantage of the Evil Control mirror. Rift Summoner was identified as the best threat in the mirror and Draka’s Fire cleanly deals with opposing Summoners. However, I was not nearly as confident in my ability to convert wins in Dark Draft. I hadn’t put in nearly as many reps in Dark Draft as I had in constructed. The structure of the Origins tournament meant we were likely to get 3 rounds of constructed and only 2 rounds of DD. With the extra round of constructed, I decided that focusing on constructed was more important. I ended up reversing my expectations going 1-2 in constructed, losing to Wild/Sage both times, and 2-0 in dark draft. Our team put 3 out of its 5 members into the top 8 and I’m really excited to test more with this team.

Nathan: I was confident in our deck and thought that we had a good grasp of the meta. So I felt we were very prepared for the event. Unfortunately, I faced the poor side of variance losing to Rich Shay (the Scarra’s Gift mirror) by not drawing Gift while he drew all three. I followed that up by a second loss to Ben Cosman (a teammate) in Dark Draft. The 0-2 start awarded me with a bye which was bittersweet but allowed me to do a bit of scouting for what everyone was playing. The next round I beat Eric Ray in Dark Draft with an amazing Evil deck. In the last round I was paired against Hampus Eriksson (a teammate) on the 59 card mirror. He was playing Zannos over Reaper which was better in the mirror and funnily enough I drew my Reaper and it felt abysmal. That match would send one of us to the Top 8 and leave the other in 9th. I did not win.

Ben: I’m not the best at picking out tech slots, but I tend to be skeptical about specific card choices. Demonic Rising, Reaper, and Hasty Retreat were the questionable includes, but Nathan can explain why those includes are important.

Nathan: I am a big fan of 1-ofs in Epic. If you compare it to a game like Magic where you have a deck filled with lands it definitely makes sense to run as many 3-ofs as possible to keep your gameplan consistent. Removing the lands and keeping the same deck size, however, leaves this gap where there was once filler. I like to use this space to insert key 1 and 2-ofs for certain matchups or gamestates.

Demonic Rising was a card to hedge against Wave of Transformation in the mirror or from Wild in situations where they can’t handle our board. It turns a no damage turn into a severe gold punish. The Reaper was a relic of the The Flock’s version of the deck that seemed really good against Wild. If you landed a Reaper against Wild they would flounder to establish because any draw two would downsize their threat. Up until the last second of deck registration I was coin flipping whether we wanted one copy or a third Zannos. The Zannos was really good at stabilizing the mirror and Hampus went with that change while the rest of us stuck to the Reaper approach. The Hasty Retreat was a hedge against the Pluck U combat trick deck and was always a safe card against Wild. It’s a terrible card in the mirror but the ability to give you an out to dig for with your draw two is always welcome in an aggressive matchup. 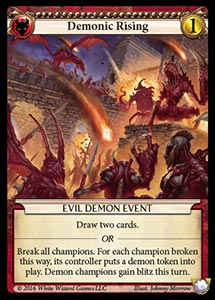 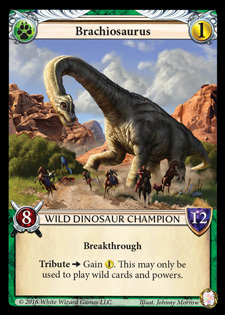 Ben: My big/only contribution to the list are the two Owls. One of the two lists that we tested extensively for Origins was a deck that tried to play Brachiosaurus as many times as possible to take advantage of the huge tempo advantage of the extra Wild gold. If we wanted to do that with Brach, why not try to take advantage of Scara’s Wills without warping the deck. I really wanted to run the full suite of Owls, but Nathan pointed out that they’re a really bad card to have in your opening hand. So we ended up with a 2 Owl, 1 Hasty Retreat split to hedge for the Pluck U blitzy pump deck from last Worlds.

Nathan: Owls were great. Buying back Scarra’s Will, Dark One’s Fury, and even Dirge of Scara (to establish the board for no gold) were all amazing.

Ben: Had I known the day before the tournament what the meta was, I would have mimicked Hampus. I was unsure of the Reaper inclusion even after I turned in my decklist, but we were expecting 50/50 Evil Control/Wild Sage. Having that singleton to make the matchup better didn’t seem like a large sacrifice. However, I don’t think I ever played Reaper and felt good about it, and there were at least 2 times that I looked at a Reaper draw and wished it was a Zannos or a Steed.

Nathan: I would also cut the Reaper for a Zannos. I don’t think you want three Steeds as they feel mediocre when drawn together unless you are already winning. 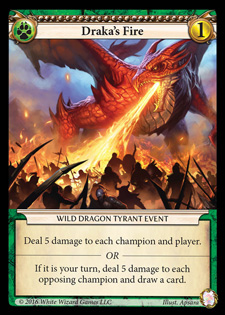 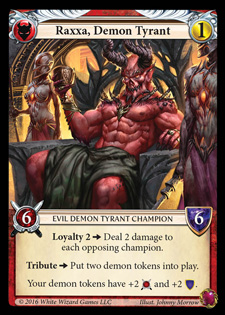 Ben: Moving forward I want to minimize the effect of Draka’s Fire on our threats, a one sided board wipe at the right time can be backbreaking. One of the cards I want to find room for is 1-2 Raxxa. He’s amazing at establishing, leaves tokens behind post Medusa, and helps to blank your opponents’ Draka’s Fire. I think, since the deck is playing more to the board now, cutting 1-2 board wipes for Raxxa seems like the best exchange. In a similar vein, I think I want to find room for a Surprise Attack. Several times throughout the tournament I wish I had access to at least one. I’m not sure if I’m confident enough to cut Fire’s for SA, but the thought is tempting; I don’t want to cut any of the Evil cards in the deck.

We saw zero copies of the Pluck U deck that Hasty Retreat is in the deck to combat. I think the meta is safe enough that dropping the Hasty Retreat for the third Owl is a safe swap as well.

If there was a Pantheon Tournament in a week, I would start testing the mirror with these changes and go from there:
-1 Reaper -1 Zombie Apocalypse +2 Raxxa
-1 Hasty Retreat +1 Owl
-1 Draka’s Fire +1 Surprise Attack

These changes make the deck a little more midrange, with more beefy threats outside of Summoner, and more counterplay to Zannos. I think the Wild/Sage matchup doesn’t change too terribly much. Surprise Attacking in an Angel of Death, and having access to more Scara’s Will to combat Brach tempo plays are good ways to not fall too far behind.

Nathan: Moving forward I expect that Scarra’s Gift gets banned/restricted/etc and we don’t have to deal with this awful mirror anymore. We only decided to play this deck because we couldn’t find a way to consistently beat the deck. Scarra’s Will and Dark One’s Fury are both backbreaking when playing a non-Evil deck. If the deck draws Gift you win basically every non-mirror match that we tested over a best of three (assuming both players have equal skill). In the mirror the person without Gift loses and if both players draw at least one Gift it turns into a two hour slog full of micro-decisions that becomes very taxing over the course of a tournament.

I would not agree with the same changes that Ben suggested but that’s what testing is for. Taking out Zombie Apocalypse and Hasty reduce the amount of draw twos in the deck and that’s your fuel for Gift. Zombie Apocalypse is actually a really tech card in the mirror. If the Gift engine is going your opponent will have little/no champions in their discard and you can set your discard up to benefit. This will clear their Zannos/Reaper and give you a few zombies tilting the board in your favor. 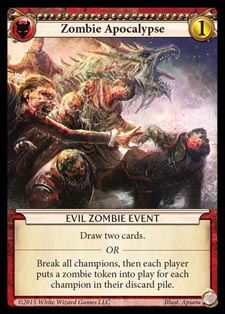 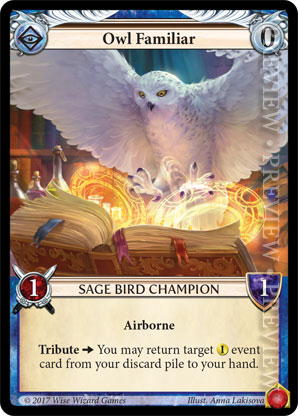 I still stand by the idea that having three Owl Familiars is not where you want to be. Yes, it is very instrumental in locking certain starts out of the game with Scarra’s Will/Dark One’s Fury but it also limits how much you can do early. I like having access to hasty and won’t be unhappy with it in my opening hand as it is always a draw two. The same can’t be said for Owl.

The best of one format definitely left a bad taste in my mouth. While Epic has less variance than a card game with resources in the deck, it still has variance. Games can still be decided on certain cards being totally absent in a matchup. The unfortunate side of things is that, due to how many decisions you are faced with playing Epic, matches would often go to time before the match completes. This is only made worse by the current evil control meta where a single game can take an extremely long time. There were two examples of this: in the swiss Rich Shay vs Dan Ging took the full 50 minutes and wasn’t completed and in the Top 8 where the Hampus Eriksson vs Dan Ging constructed game went to the full two hours.

I would like at least one more tournament with Pantheon. I don’t think that the meta is completely solved, but one more tournament would give us a definite answer. I think tokens could spike a tournament, Wild/Sage could beat a meta where Evil Control is just trying to beat the mirror, or some dark horse deck could come out of the woodwork and take the tournament down as well. And I never know what Tom Sorensen could brew up for next time. But as of now Evil Control is above and beyond the top dog.

Only in the Origins 2019 Gift Horse deck: