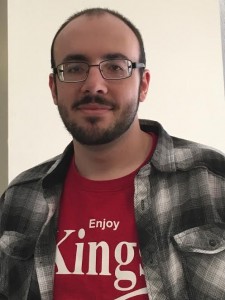 My name is Nathan Overbay. I am 22 and live in Virginia Beach, VA.

I started playing Epic with the print and play version from the kickstarter. I started with Yugioh but I got hooked on Magic soon after and never looked back. This was about nine years ago. I started in Lorwyn block.

Recently I’ve been playing a few times a week. Before that we would play the occasional sealed game or cube draft. A small group of us tested constructed and limited for the Virginia Qualifiers.

I did mulligan my pool. It didn’t take me that long to realize I wanted to mulligan. It didn’t have any way to banish cards from my opponents discard pile (Amnesia, Feast of Blood, Guilt Demon, etc.) It also had a lot of loyalty which I’m not really a fan of in limited.

I was hoping to see Muse, Lightning Storm, and discard hate. I ended up with Lightning Storm and Amnesia in my final pool along with strong faction independent cards. Which is important, I think.

The most memorable thing that happened was actually a play my opponent made. In the Dark Draft portion my opponent had Infernal Gatekeeper out from the turn before, he played a Spawning Demon followed by Raxxa’s Displeasure to make two demons and breaking my board. It sent us to game three.

I was extremely happy with my Dark Draft deck. I opened with Muse and went into a Wild/Sage Aggro deck with dragons, dinos, and burn. My suggestion for Dark Draft is make sure that you have an adequate amount of ways to draw cards and be very careful picking up Loyalty.

I’m going to take a bit of a break until we see all the spoilers and then pick up testing when we have the full card list. I feel that I have a very strong grasp of limited. My weakness is constructed and I will iron that out before Worlds starts.

Definitely check out Tom’S Epic Gaming for all of his detailed insights on the game. Play a constructed deck you are comfortable with and don’t be afraid to mulligan your card pool in limited. See you all at Worlds!