How to Manage Your Gold in Epic Card Game

Each turn in Epic (yours and your opponent’s), you get 1 gold.  Since, at its heart, Epic is a game of resource management, let’s take a look at how best to manage the scarcest (and most important) resource the game has to offer.

Principle 1: Speed is crucial. Whether drafting or constructing an Epic deck, it is paramount to have enough “fast” cards in your deck. (Fast cards are 0-cost cards, Events, and Ambush Champions.) Especially important for this discussion are 1-cost Events and 1-cost Ambush Champions, as these are more powerful than their 0-cost counterparts, but also allow you to spend gold on your opponent’s turn. There are very few corner cases where you do not want to spend your gold when given the option. If you are spending 2 gold each round while your opponent only spends the gold on his/her turn, you will be able to develop your board presence and/or hand size twice as fast as your opponent will. 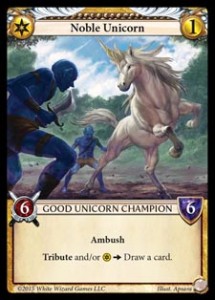 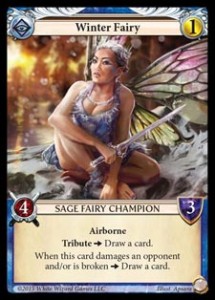 Principle 2: Card draw fuels your ability to spend gold. Since we’ve just discussed how you want to be spending your gold on both your turn and your opponent’s turn, this means you will be playing at least 2 cards per round. And when you play 0-cost cards, or cards that generate extra gold, you will be playing even more than 2 cards per round. Unfortunately, by default, you will only be drawing 1 card per round. Thus, if you intend to optimize your gold spending, you are going to need to play cards that draw you more cards.  A card with Recycle or Tribute → Draw a card will at least replace itself and so should be valued highly (see Winter Fairy or Noble Unicorn), but even more valuable are the Events that allow you to draw 2 cards during your opponent’s turn at the cost of 1 gold. These cards always have some other ability or mode as well, which gives them even more flexibility. It is nearly impossible for these Events to ever be truly “bad”, and in draft they should be considered before all but the most powerful Champions and Events. 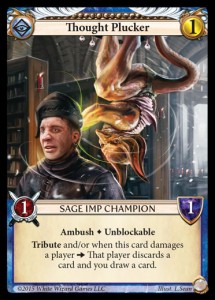 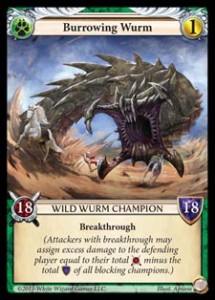 Principle 3: Break the symmetry. As much as you want to make sure you are able to spend 2 gold per round, you won’t really gain an advantage if your opponent is doing the exact same thing. Therefore, you want to include cards in your deck that make it difficult for your opponent to spend gold during your turn. Most obvious are the cards that actually force discarding (like Thought Plucker), so your opponent simply doesn’t have enough cards to play. But there are other ways to do this as well. For one, you want to make sure that you always have a large threat on the table that needs to be dealt with (such as Burrowing Wurm). This will force your opponent to use Events as removal for your Champion, rather than as a “draw 2 cards” effect. You also want to use your “sweeper” Events to kill several of your opponent’s 1-cost Champions at the same time, allowing you to spend a single gold to nullify multiple gold spent by your opponent. On the flip side, be cautious about overextending and playing too many of your own 1-cost Champions while your opponent’s side of the table is empty; you may be being baited into this by your opponent so he/she can play a sweeper against you. 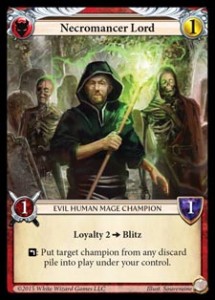 Principle 4: It’s not just spending gold, it’s when. Not only do you want to spend your gold each turn, you also want to spend it as late as possible in that turn. Ideally, this should be done after your opponent has already spent his/her gold, giving you a chance to respond to new threats. This is much easier to do when it is not your turn due to the structure of the Events Window, but there are definite considerations during your turn as well. For example, you almost always want to make attacks with your existing Champions before playing any new Champions. This gives you the flexibility to spend your gold on an Event that helps you in combat, but even if you don’t have one in your hand, having your gold available can serve as a bluff. Another gambit that you can try is to pass the turn without spending your gold if you have a powerful Blitz Champion in hand. If your opponent spends his/her gold on a “draw 2 cards” Event, you then get an opportunity to play and use your Blitz Champion and your opponent won’t have the gold to respond. (Worst case, your opponent passes as well, and you’ve both missed spending your gold, maintaining parity.) Consider this gambit when holding a card such as Necromancer Lord. Heaven forbid you immediately put another Blitz Champion into play! But even if you just dig up a high-offense Champion from the discard pile, you’ve now created two new major threats that your opponent will need to deal with, likely by spending gold for a removal Event on his/her turn, instead of getting to play a new threat.