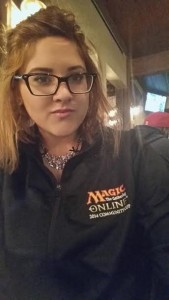 I started playing Epic Card Game in September 2016 when I first learned about the game and the World’s tournament. My strategy card game was Magic: the Gathering, like most Epic Card Game players. I’m fairly new to competitive card games and was introduced to them in 2011 but ever since I’ve been hooked.

Since winning the World’s Qualifier I have played Epic Card Game every day. Currently I only test with my boyfriend, Tom Ross, but we hope to start adding some other players as World’s draws closer.

I played a Sage/Wild tempo deck. I think this is the deck that is the most obvious to Magic players. Tom and I identified the most inherently powerful cards and built a deck that utilized them the most efficiently. I was very happy with the decks performance. My only goals were to qualify for Worlds and gain experience which I can happily say were achieved. There are some minor card changes that could be made but I think the core cards of the deck were very good.

I looked at many decks lists that had placed well in tournaments but found too many variations of decks to specifically metagame for. I was not surprised to see the Good list that won a qualifier earlier this year in the tournament. I tried to include a number of interactive cards so that I could have a plan for most match ups.

I included a lot of Transform cards in the deck, such as Elara, the Lycomancer and Wave of Transformation, and paired them with Forcemage Apprentice and Helion, the Dominator. This allowed the deck to interact very efficiently with other champions and apply good pressure. I was most afraid of facing a lot of burn because I included zero health gain cards. Creature with Airborne could also give the deck difficulty if they couldn’t be answered immediately.

I plan to keep up Tom and I’s fairly vigorous testing schedule and improve my limited skills. Closer to worlds I will start working on Constructed after Uprising comes out and focus our testing more. I’m fortunate enough to be surrounded by some of the best Magic deck designers so I’m sure I will have something great. The best thing I can do is focus on my personal skills and experience.

I think the most important thing is to show up and play. This is a valuable opportunity to take place in a high level tournament and the game is incredibly fun. If someone wants to qualify I believe they can as long as they put in the time.