This is a guest blog post by Derek Arnold, and was originally published on Derek’s blog Epic Insights. Derek is a 27-year-old gamer from Cleveland, OH. He is the winner of the first ever Epic Constructed World Championship Qualifier at Origins 2016.

For those of you who were not aware, Wise Wizard Games held four qualifiers for their Epic World Championship at Origins consisting of two limited events and two constructed events. Prior to these events, two qualifiers were held this year, both of which were limited tournaments. The tournaments at Origins included the first ever constructed qualifiers for Epic. In today’s article I will go over the deck I used to win the first constructed qualifier, as well as an updated list that attempts to correct some of the issues with the deck. Below is the deck list I registered for the tournament. You can view the deck over on Epic Foundry in the tournament section for a closer look. 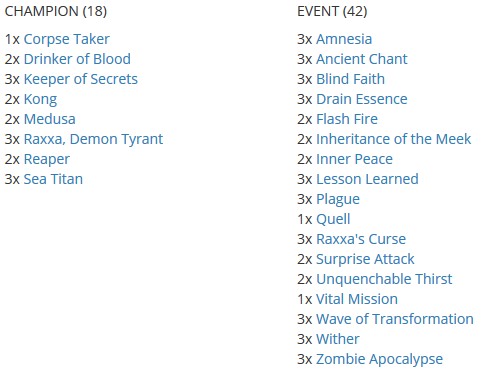 For starters, I’m not recommending this exact deck list to anyone looking to play it in a future Qualifier for a couple reasons. First, a large part of why this deck was successful in this particular tournament is that most players were not prepared to play against it. Now that the deck has won a tournament and the list is public knowledge most players will be familiar with how the deck works and be prepared going forward. Second, this is a slow deck. This is probably apparent from just a brief look at the deck list. This deck includes a lot of answers and ways to not die, but few proactive cards that can actually win the game. Most games are going to be a grind to edge out an advantage over the course of a long game. The implication of a slow deck in a tournament is that many of the matches can go to time. I feel there are some improvements that can be made to this list to help the deck finish games more quickly.

Each round has a fifty-minute time limit. If a game goes to time, the current player finishes their turn and then the other player gets a final turn. If there is not a winner after the final turn, the game is considered a draw. This structure in conjunction with the fact that this deck will go to time most matches means it is crucial to win the first game. If you win one game and draw another, you still win the match. You do not have to win two games; You just have to win more than your opponent. All of my matches in the Swiss portion of this event went to time, with the exception of an intentional draw in the last round. Here is the game breakdown form the Swiss rounds;

Going into the tournament, I knew I likely would not win any round where I lost a single game. This deck cannot easily win multiple games per round due to time limitation and speed of the deck. That being said, I only lost one actual game during the entire tournament. The deck struggles to win quickly but is fairly good at not losing. This deck worked better in the Top 8 where there was no time restriction and it had room to grind out the long game winning each round after just two games. However, each match went on for about an hour, so it’s not too far from the edge of being able to consistently finish matches during the Swiss rounds.

This deck was designed to have a lot of answers and was prepared for what I anticipated to be the most popular decks and cards. Going into the event I expected to see human token decks, a lot of direct damage, and some discard decks, as well as powerful champions such as Sea Titan, Raging T-Rex and Strafing Dragon. These strategies and cards were the most powerful in testing for the tournament, but I also anticipated I’d play against a variety of other decks.

This deck has a lot of synergistic card combinations and, because games typically have more turns compared to more typical games, these combinations will come up more often. Drinker of Blood acts as a finisher with Flash Fire or Wither after a Zombie Apocalypse which can make a lot of zombies from discard piles full of champions. This serves as the main method for winning in the late game as each player’s discard pile fills up with champions. Raxxa serves as a one sided mass removal after a Zombie Apocalypse or Wave of Transformation on your opponent’s turn that leaves you with a large board advantage. Corpse taker can return a Sea Titan to your hand from your discard pile which can then be played to return the Corpse taker back to hand. In the finals I was able to draw four cards with a single gold against a discard deck by playing an Ancient Chant from my discard pile with Lesson Learned (see Epic Combos and Rules on Epic Insights for a detailed explanation of this interaction). This same effect can be done with Keeper of Secrets by playing and then Recycling away Ancient Chant. In theory you can draw five or even six cards from a single gold with multiple Keeper of Secrets and enough cards in your discard pile (This has never actually come up in a game).

In addition to the synergistic combinations, many cards serve multiple functions that give the deck a lot of flexibility going into an unknown field. Blind Faith allows you to interact in ways that would otherwise be impossible. You can break unbreakable champions, block unblockable champions, target untargetable champions, take no damage by blocking champions with breakthrough and use champions without airborne to block airborne champions. This card outperformed my expectations in the tournament which is saying a lot because I already thought this was one of the better cards in my deck. The main reason I played six of the nine good cards was to enable a full set of Blind Faith. I broke a Sea Titan and blocked a Strafing Dragon with a single Medusa. I removed breakthrough from a sixteen fourteen Raging T-Rex after blocking with a zombie. I didn’t play against any token decks but Blind Faith answers Insurgency in conjunction with Flash Fire, Plague or Wither to break an assault of Unbreakable human tokens.

Inner Peace serves a dual purpose, the main of which is to survive against early direct damage. Several games during the tournament were within range for my opponent to win with direct damage but a timely Inner Peace kept me alive to come back later in the game. The other purpose is to serve as a card to chose to discard effects with the potential to recall later without loss of card advantage. This is less reliable as there are only six one cost gold cards in the deck, but it did come up in the finals of the tournament.

Vital Mission was included with the intention of being an additional targeted removal card that could also serve as additional health gain and card advantage if needed. In practice the card was not very good. Quell was added mainly to answer tokens which I didn’t play against in the tournament. Even against tokens it servers as more of a stall than a hard answer because you typically can’t clear the entire board. I would change out these two cards for a pair of Urgent Messenger. The human tokens from Urgent Messengers serve as chump blockers which get better with Blind Faith and add additional champions to the board for Drinker of Blood. They can also be “upgraded” to demons with Reaper all while drawing two cards and being a more reliably trigger for Inner Peace recalls.

Zombie Apocalypse, Wave of Transformation, Inheritance of the Meek, and Plague serve as the suite of fast mass removal cards. Plague also works well as a draw two option (or draw three if an Ancient Chant is recycled) and the one damage to both your opponent and their champions can be relevant. Zombie Apocalypse and Wave of Transformation work with Flash Fire and Wither to clear the board. Again, there two cards can also setup a combo with Drinker of Blood on your turn in conjunction with either of the zero cost sweepers. Inheritance of the Meek also works well with the tokens in the deck to leave you a board presence after the mass removal effect.

The absence of Erase in the deck is worth a discussion. In testing I did play with a set of Erase and found the tempo and card advantage beneficial almost across the board. However, the deck is carefully balanced to have exactly twenty zero cost cards which means there is not enough room for both Erase and the other Sage cards without making somewhat significant changes to the deck. Excluding Erase may have been a mistake and the deck may be better with it. There are just not many good reasons not to play Erase.

Below is an updated list that includes more threats and proactive ways to make an impact on the board at the cost of some of the more controlling cards. It is not a large deviation from the original list but has some notable changes. Soul Hunter was added as an alternative win condition working well against decks with few or no banish effects or ways to interact with the discard pile. In practice, this card generally does not do much and was therefore limited to a single copy as an alternative late game win condition. That being said, it does work very well with Reaper enabling you to break it immediately and leave a demon token in its place (more info on this interaction at Epic Combos and Rules on Epic Insights). Medusa and Reaper were increased to a full set to add more champions and ways to break single targets. Reaper in particular gets better with the inclusion of Urgent Messengers and Plentiful Dead by again, allowing you to “upgrade” your tokens into demons. 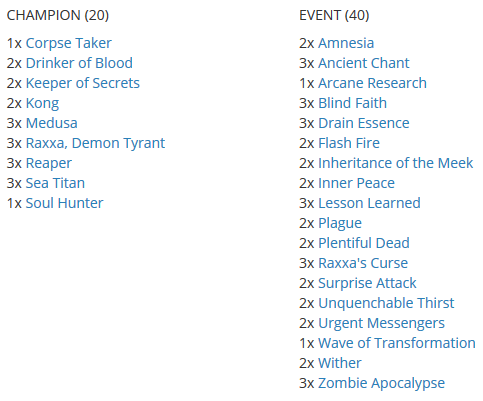 Arcane Research helps you get to a specific card when absolutely needed, but can be tricky to play with so many interactions going on in the discard pile. You don’t want to banish one cost event cards you may need later with Lesson Learned or champions you may need for Zombie Apocalypse or to bring back with Corpse Taker. You’re generally going to be banishing your non-evil zero cost cards first to leave enough evil cards in your discard pile for Unquenchable Thirst. However, these considerations all vary in importance based on the game state and match up. Arcane Research is probably the most difficult card to use correctly in this deck and you can certainly lose a game by banishing the wrong cards if you’re not careful.

The addition of Plentiful Dead warrants some explanation as well. This card is meant as an answer specifically for the control mirror where both plays have more answers than threats. Plentiful Dead serves as a way to put champions on the board at no loss of card advantage or gold spent. Your opponent is going to have to answer the zombie in some way or take two damage each turn until they run out of health. This card is intended to act as a way to break a stalemate in the mirror. The best way to play this card is to never pass initiative with it in your discard pile to eliminate the possibility of your opponent to banishing it.