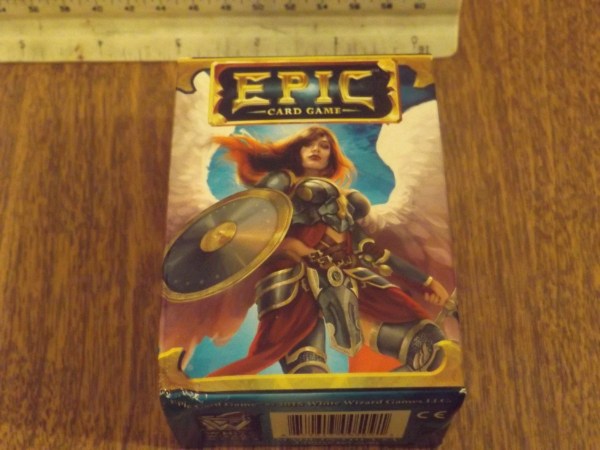 This is a guest blogpost by Thomas Sorenson. Thomas spent a week with us at Wise Wizard Games as a “Wizard for a Week” Kickstarter supporter, and he writes detailed strategy articles about Epic Card Game on his blog, Tom’s Epic Gaming Blog. This blogpost originally appeared there.

I said I wasn’t going to rank cards in my previous article that covered Epic Card Game Card by Card Analysis for Drafting. Well…I got carried away describing my drafting philosophy, so I did it anyways. (In my defense, writing this article has inspired me to begin programming an Epic drafting AI. So, I’ll eventually need these rankings for that.) Anyways, explained below is my drafting philosophy that has been working very well for me. 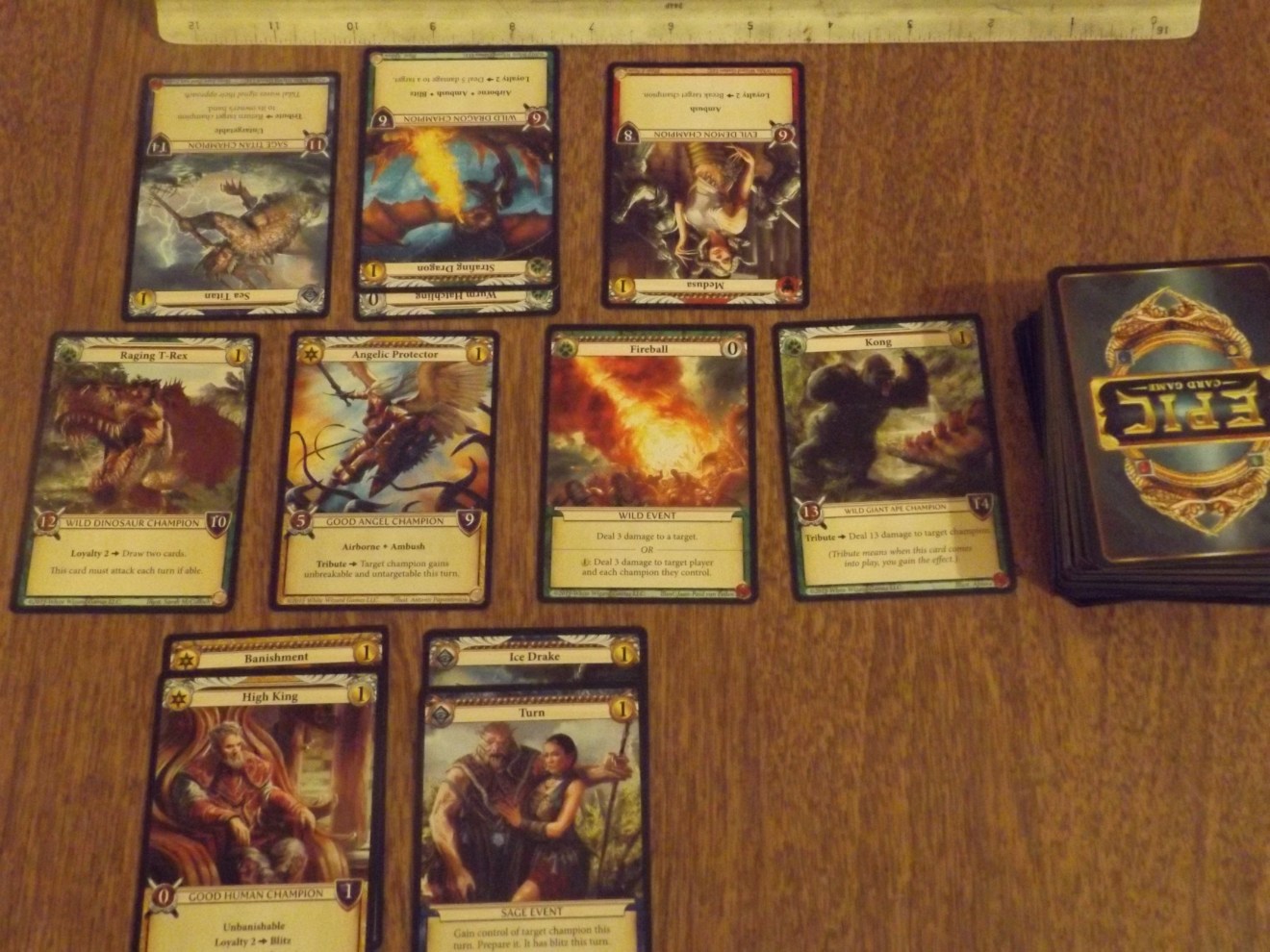 These cards are incredibly valuable cards in essentially any deck. These cards also do not require a faction investment to be useful. 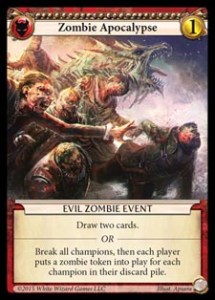 These cards are incredibly valuable cards for specific factions. To best use these cards, you need to commit to drafting cards of that faction. With those faction commitments, these cards all become superstars for your deck. In addition, since they are potentially so strong, they can be worth counter-picking to deny your opponent. I call them Draft direction cards because they help decide what you should draft moving forward. 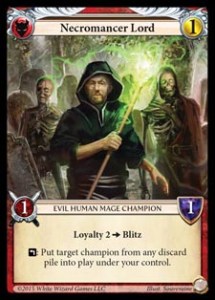 These are cards you should take to meet the faction requirements dictated by your Draft Direction cards. These are cards that either rely on the same faction investment to be useful, or they just aren’t powerful enough to make the above two categories. All draw 2 cards are at least in this category if not higher. Generally, cards in this category matching your faction investment(s) are better for you then cards that don’t match.

These cards are similar but not as useful as Strong Faction Specific cards.

These cards are usually weak, but in certain circumstances, they can be incredible.

These cards aren’t worth drafting. They are almost always bad, and, if possible, they should frequently be cut from your deck if you have to draft them.

Drafting a winning deck relies on 3 aspects: getting powerful cards/combinations, balancing the type of cards in your deck, and countering your opponent’s deck.

Don’t Commit to a Faction too Soon

In general, I focus on drafting Always Strong cards, and other useful, non-faction specific cards first. Once I am able to grab a Draft Direction card, I begin to focus on supporting that faction. While my decks usually contain all 4 factions, I frequently try to support only 1 faction, sometimes 2. For the factions I support, I will take cards that rely on their Loyalty 2 and Ally abilities to be useful. For the remaining cards I draft, I avoid Loyalty 2 and Ally abilities.

When drafting Epic, you never want to predetermine the faction(s) you will pursue; it is very possible there won’t be many amazing cards of that faction in your specific draft. It is not worth it to draft faction specific cards early, if it means drafting Weak Faction Specific or lower category cards. Since you aren’t guaranteed to see the Draft Decision cards of that faction in your draft, and your opponent might get them before you, taking sub-optimal, slightly synergistic cards can be severely disadvantageous. I would much rather have strong cards in multiple factions, than weak cards in the same faction.

Not committing early also allows you to adjust your strategy based on the cards available later.

The closest thing Epic has to mana-flood/mana-screw is slow-flood. This happens when you have no way to spend your gold on an opponent’s turn. Usually, this is because you have no Fast cards (ambush champions and events) in hand. Gold-recall and gold-activated abilities can mitigate this to an extent.

To avoid this, it is very important to have at least half your deck be Fast cards. In addition, in a 30 card deck about 6 cards should be 0-cost. The more reliable draw you have, the more 0-cost cards you can run, up to about 10.

If you can work out your opponent’s strategy, you can pick to counter that strategy. On the simplest level, if you see your opponent take Angel of Death, don’t let them have Necromancer Lord too. If they’re going Evil, deny them Evil Draft Decision cards. In addition, White Knight becomes significantly better.

If they draft Lightning Storm, Psionic Assualt, or other discard dependent cards, Guilt Demon and Keeper of Secrets get better.

If they are going for a token strategy, deny Courageous Soul and prioritize Flash Fire, Hurricane, etc.

If they have a lot of targeted removal, Steel Golems and Sea Titans are even better. If it is banishment based removal, Thundarus.

It’s generally a bad idea to let your opponent get both Psionic Assault and Thought Plucker.

This aspect of drafting takes awhile to learn. Until you understand the relative power of cards and combinations, it can be incredibly difficult figuring out: when to counter your opponent and when to improve your deck. As long as you pay attention and learn from your mistakes, this will become easier. This is probably my favorite part of Epic.

I went through and divided all of the cards in the base set into the 6 categories explained above. I then ranked all of the cards in those specific categories. My rankings assume that you have the required cards to activate Loyalty/Ally. The card becomes weaker if you can’t. The number after the ~ is the adjusted value. In general, once you have a Draft Decision card, cards of the same faction in the same category are generally better.

Based on my ranking system, Sage is the best faction overall for drafting; however, all factions are still viable.

Sage came away with the highest score for a couple of reasons. First, Sage has by far the most Always Strong cards. Due to this, you can draft powerful Sage cards even if it is not your primary faction. You can cherry-pick Sage cards and still support any of the other 3 factions. Second, I generally valued Sage cards higher in their respective categories then any other faction. So, from a blank slate, Sage cards start off slightly stronger, but the cards in the categories are fairly close in power. If you do go Sage, even though they  only have 11 Draft Decision and Strong Faction Specific cards, it is easy to draft strong cards to meet the faction investment.

Evil had the weakest score. One reason is because it has the highest number of Not Worth Drafting cards. It is tied for the second most Always Strong cards though. In addition, the Draft Decision cards for Evil are more powerful then any other faction, but it only has a combined total of 11 Draft Decision and Strong Faction Specific cards. If you get Necromancer Lord or Angel of Death, it is worth it to go Evil. If not, I would generally just take the Always Strong Evil cards.

Good has the least Always Strong cards. It does, however, have the most Draft Decision and Strong Faction Specific cards, 15. So, Good is the faction most likely to benefit from having an investment in it, as opposed to just taking a few Good cards.

Wild has the least Draft Direction cards in the base game, granted Raging T-Rex is a great one. In addition, 9 of the 12 Strong Faction Specific cards are only there because I didn’t think they were strong enough to make the Always Strong category. In other words, they don’t have Loyalty/Ally requirements. Like Sage, Wild cards can be cherry-picked without requiring the faction investment.

Overall, Evil and Good cards are more dependent on a faction investment. Sage and Wild are strong without a faction investment. All factions are viable, and it is frequently more important to draft powerful, synergistic, non-faction specific cards, to draft a balanced deck, and to draft a deck that counters your opponent then it is to draft in-faction. Drafting a specific faction is important to be able to play your best cards effectively, but it should not distract you from everything else.