These rules only apply to games with three or more players.

Players take their turns and pass initiative in a clockwise direction.

The first player draws a card at the start of their first turn (unlike in a two-player game).

In this everybody-for-themselves format, you may attack and target any opponent. The last player alive wins.

Same as Free-for-all, except you may only attack the player to your left. Your effects can only see and affect you and players to your immediate left and right (for example, “banish all champions” would affect your and their champions, but not anyone else’s). When any player is eliminated, the player to their right wins (no matter who did the eliminating – so play carefully!).

Same as Hunter – First Blood, except when a player is eliminated, the person to their right doesn’t win. Instead, that person gains 5 health and draws a card.

For Team Multiplayer games, each team counts as a single entity. The last team standing wins! Alternatively, if any one player wins the game (for example, by drawing a card from an empty deck), their entire team wins the game.

Each team of players shares a health total, which starts at 30 times the number of players on the team, and shares each turn. Each player has their own deck, discard pile, champions, and gold.

Attacks are directed at an opposing team. A player’s champions may attack and block in groups with teammates’ champions. Your teammate can block or help block (group block) attacks directed at you.

These rules are BETA rules and may change after additional playtesting and feedback.

Players split into two teams of three. Each team chooses one teammate to be their Emperor. The Emperors sit facing each other, flanked by their teammates (Commanders) on either side: 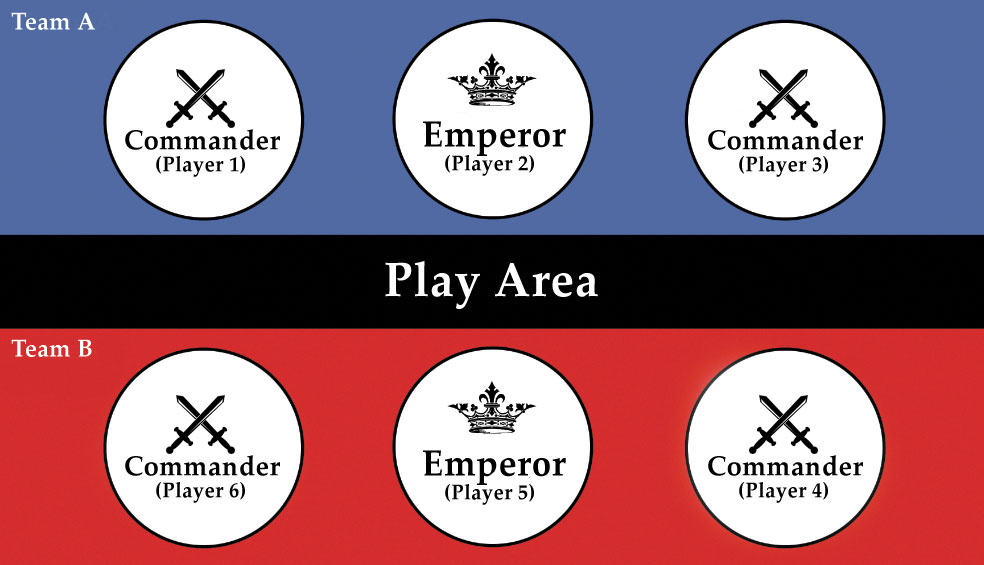 When an Emperor is defeated, their team loses the game!

These rules are BETA rules and may change after additional playtesting and feedback.

Choose one player to act as the Boss with all other players acting as Raiders. The Boss begins the game with a variable amount of health and starting hand size, both determined by the number of Raiders (see table below). Raiders begin the game with 30 health each and five-card hands. Play starts with the Boss and proceeds clockwise around the table.

Raiders take their turns individually. Raiders may look at each other’s hands and discuss strategy. Though Raiders are a team, each still has their own Health and Gold, and still makes their own decisions regarding playing cards, activating abilities, attacking, and blocking. If all of the Raiders are eliminated, the Boss wins!

At the end of each Raider’s turn, if the boss has unspent gold, they draw a card. (As usual, unspent gold does not carry over to future turns.)

The Boss’ starting Health score and hand size is dependent on the number of Raiders.

If the Boss is eliminated, the Raiders win!