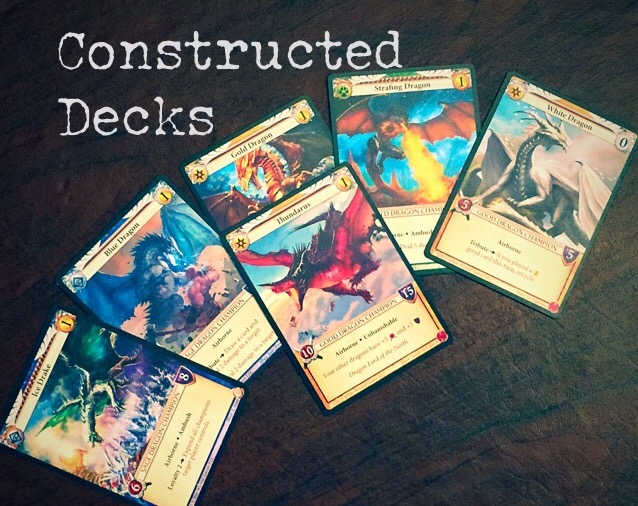 This guest blogpost is by Bill Anderson, winner of our 2015 GenCon Epic Card Game Tournament!

Hi, my name is Bill Anderson and I started playing Epic Card Game with the Kickstarter print and play. It played even better than I expected, so my wife and I took a trip out to Gen Con to play in the first Epic tournament. After 6 rounds of swiss and a top 8 draft (featuring the excellent 2 player format dark draft), I ended up winning (My wife made top 8 as well). Since I received my copies of Epic, I have been building constructed decks to try to get the competitive scene rolling.

With that said, is there a ton of depth to Epic constructed or what? I have made about 10 unique decks at this point, and I have played against a handful of others. But where to start when it comes to a competitively viable deck? Since there hasn’t been any large constructed tournaments to influence the metagame, the best we can do is make a solid deck that has play against many different decks. For those of you who don’t know, a metagame is the currently viable competitive decks that you are likely to see at a tournament. Often, these decks will influence small changes in other decks to combat them, or entirely new decks to try to beat them. Thus, a metagame will evolve over time as people learn from other people what works and what does not. Now, what other decks do we think will be out there? Good/Evil Tokens is definitely a deck that can win on turn 2 or 3 if not interrupted. Unbreakable champions plus board clear is another solid option. Wild burn will always be there, as 30 straight to the face will win a lot of games. And there will be numerous control decks that seek to win by clearing the board and drawing more cards than their opponent.

With all of these decks in mind, I propose starting with a midrange deck. In this blogpost, I will talk in detail about a midrange deck, and I will cover some of the other decks mentioned in future blogposts. A midrange deck tries to have plays available for many different situations. It doesn’t only care about dealing 30 damage as fast as possible (Aggro), and doesn’t only try to control the board and win when your opponent has almost no options left (Control). It is a combination of both that plays how it needs to against its opponent. It just isn’t as good at aggro or control as its counterparts. My first attempt at this turned into a dragon deck: 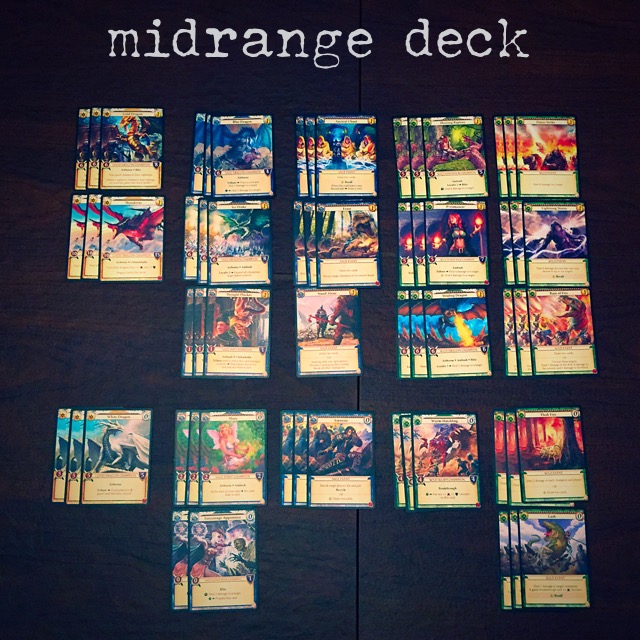 That being said, this deck revolves around the synergies between the dragons. Drop Thundarus on a board where you have even one other dragon and your opponent better have a really good answer, and fast. The tricky part is that not all of the dragons are powerful cards if you don’t have an abundance of their color, and dragons currently cover three colors. So which dragon needs the most help to be good? In my mind, it is Strafing Dragon. A 6/6 Ambush/Blitz/Airborne for a gold is certainly decent. However, if you can reliably get the extra 5 damage out of it, it becomes a beast! 11 damage to the face on turn 1 puts on a lot of pressure, especially considering there aren’t many champions that can block it. Not to mention 5 of the damage is straight to the face, without any recourse. As you can see, with enough Wild cards, Strafing Dragon quickly becomes one of the best cards in the deck.

This deck looks to win quickly with the Wild cards. Getting in plenty of damage early with Strafing Dragon or Hunting Raptors leaves your opponent vulnerable to burn or dragons later in the game. It has answers to tokens with Flash Fire, answers to big guys with Erase plus aggro, and Amnesia for the pesky Army of the Apocalypse-style decks. Overall it will draw plenty of cards to keep the burn or beat down coming.

While the dragons are pretty self explanatory, here are some explanations for some of the other cards:

I look forward to playing many of you in competitive tournaments in the near future. Remember that this is just a first go at a solid midrange deck, but it has had a lot of success in my playtesting so far. Let me know what you think, and I’d love to see the decklists you have put together!