I had the privilege of attending the Epic World Championships this year. And what an event it was! For those of you who were unable to make it, I’d encourage you to definitely find a way next year. At the risk of filling you with (further) regret for missing it, I’d like to share some stories and observations from the weekend. Consider it a primer for what to expect in 2017. 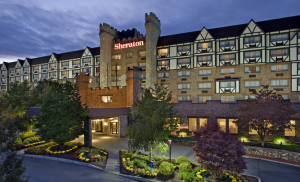 When you arrive at the venue, you will realize that this isn’t simply a hotel. Wise Wizard Games appears to have rented an honest-to-goodness castle. But inside, this far from some musty medieval manor. Comfy leather chairs dot the lounge area. Plush carpets are flanked by decorative fire. Pellucid chandeliers bedeck the plafond. (That’s the best sentence I’ve ever written.) In other words, this is the perfect place to enjoy both a weekend of relaxation and a weekend of intense battle.

Certainly the ideal way to set out to Framingham is with qualifier win already in your back pocket. But even if that hasn’t worked out for you, you will have ample reason to attend. First and foremost, the weekend includes several last chance qualifiers, meaning you might even get to participate in the main event after all. And if that doesn’t go your way, try your hand at qualifying for next year’s event (while the 64 best players in the world are all unavailable to compete!) There are promo cards, casual Epic matches, artists to meet, and demos of other fine WWG products. Not to mention plenty of product for sale. 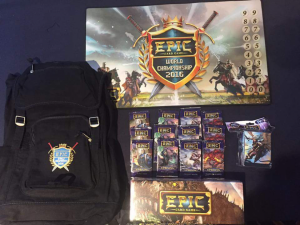 For those who do qualify, the “swag bag” is out of this world. Those of you used to typical convention swag might expect a plastic grocery bag full of coupons, pens, and button pins. Nope. This is a legitimate canvas backpack with the Epic Worlds 2016 logo embroidered right onto it (not a patch). Inside, an exclusive Worlds 2016 playmat featuring the art from Ceasefire (appropriate for how often that card appeared over the weekend). Hundreds of card sleeves. Deck boxes. Promos. And, most importantly, a full constructed play set of Epic: Uprising. Even the most jaded and cynical of gamers couldn’t possibly find fault with this. 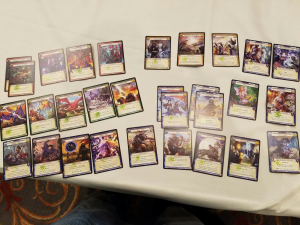 Day 1 began with Cube Draft. I heard from player after player how this was a format they had been least able to practice. After all, most groups aren’t so lucky as to have 8 regular players. Moreover, it’s not a qualifier format, so most players had to rely on their Dark Draft skills. After seating arrangements were completed, each player was given three plastic snap cases with pre-shuffled cards to serve as the packs. Each card was stamped to avoid any shenanigans and players were able to keep the cards they drafted. I really enjoyed getting to keep a copy of my deck as a souvenir, but I also saw many other players throughout the weekend trading stamped cards trying to complete a favorite constructed deck or even an entire cube. Who would have thought that a fixed-distribution card game could still have players bartering for cards with one another? 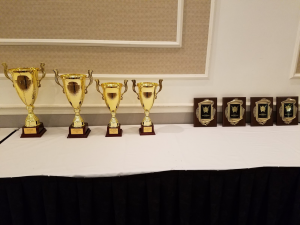 Rounds 3 and 4 were Dark Draft. Each pair of players was given a complete sealed set of every card, and we began the rounds by cracking open the packs and shuffling up all the cards. Apparently some of the Tyrants packs had collation errors resulting in a duplicate of one card and a missing of another. WWG was prepared for this and swiftly corrected all errors from the “big box o’ extra cards”. In round three, all the extra cards were collected after the draft but before the games. In round four, players were allowed to keep the cards so long as they were removed from the table. Although these were not stamped, I think the players definitely appreciated yet another opportunity to get extras of some of their favorite cards. At this point in the day, those still in contention for Top 8 started to greedily eye the trophy table. 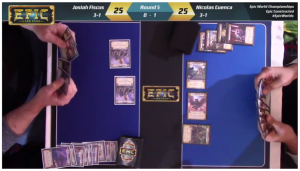 In the first constructed round, I was given the opportunity to play a game in the media room on the Twitch stream. I found it a bit more nerve-wracking than a normal game for this reason, but I’d do it again in a heartbeat. Having since had the opportunity to watch the video of my match, I was extremely impressed with the quality of commentary. While it can be disheartening to have each of your minor misplays pointed out, I agreed with every criticism that was levelled at me. It makes me wonder if everyone’s play might be improved by recording your games and watching them afterwards. Be your own critic. 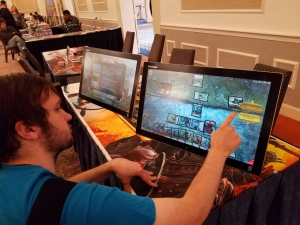 For the 87.5% percent of us who did not make the Top 8, Day 2 was a much more relaxed affair. Some began their travels home, some stayed to play in a 2017 qualifier, some demoed the upcoming Epic digital app, some just relaxed on couches and watched the Top 8 stream on the big screen. Many did all of those things, myself included. Watching the finals, I was astounded by the skill of both players, who sometimes made very non-intuitive plays that later proved absolutely correct. Be sure to watch at least the final match if you missed it. Definitely one for the ages. It was, in a word, epic. Here’s to many more to come. See you next year!