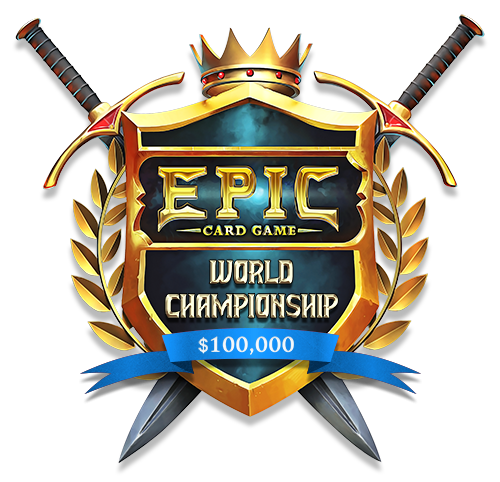 Nathan Davis is an editor and associate designer of Epic Card Game. This article is the first in a series of articles discussing Epic World Championship 2016 at Wise Wizards Game Fair.

PART ONE: THE ROAD TO WORLDS

The 2016 Epic World Championship is in the books, and John Tatian is our first World Champion. You can see the dramatic, all-five-games final match on our YouTube channel. We will have additional content posted in the near future, as well. But this article is not just about that match, it is about an entire weekend of Epic Card Game played at its highest level, and how we got here.

It all started in Austin, Texas at SXSW Gaming. SXSW is a massive music and media festival which has been slowly cultivating a growing gaming scene. With just the first set of Epic, we had our first World Championship Qualifier. Benjamin Sullivan played the game for the first time that weekend, purchased a set, practiced for a couple of days, and won our first event.

SXSW also saw the global debut of Epic Tyrants, which changed the constructed scene. Before Tyrants, most constructed decks were based around an idea but not around a theme. Using just the first set, players built around their favorite Loyalty champion (Raging T-Rex, Angel of Mercy, Angel of Death, or Time Walker for many players) and most other decisions flowed from that. Tyrants changed everything. With the release of the four Tyrants, decks became much more focused. With the other 44 cards in the set, decks became more powerful. The game progressed.

And as the game progressed, the top players in the game progressed. Strategy discussions kicked up on BoardGameGeek. People started testing together. The Epic community was beginning to take shape, and it was filled with friendly players eager to tackle a new challenge.

John Tatian’s first chance to qualify for Worlds came at a local event in Cambridge Massachusetts in May. A tournament that went very, very late into the night saw him lose in the finals to Bill Anderson. Anderson, who won the very first sanctioned Epic event in the prior year’s GenCon, would have a tough time at the World Championship but is excited to try to make it to next year’s event. I remember Tatian saying that he was going to find a way, “no matter what,” into the World Championship.

Our first two Constructed qualifiers for Epic Worlds took place at Origins 2016. Derek Arnold won the first event with a Four-Color Control deck based around Raxxa, Demon Tyrant and Zombie Apocalypse. Derek talked about his experiences on his Epic Insights blog, and would go on to be one of the leading voices of Epic all year long. Hampus Eriksson won the second qualifier with a deck that became the basis of most decks this summer — Wild Sage Control. Josiah Fiscus, someone who would go on to win a Constructed qualifier later in the year, wrote a great article breaking down the Origins metagame.

Two other people qualified at Origins in our limited qualifiers: Rich Shay, who would go on to an 11th place finish at Worlds, and John Tatian. John’s persistence, of course, paid off handsomely with his World Championship win.

The Road to Worlds would then accelerate. Two qualifiers were held at ConnectiCon, advancing Nicolas Cuenca (finished 10th at Worlds) and Jonah Acosta (finished 5th to 8th at Worlds). We then held another four qualifiers at GenCon, advancing Thomas Dixon (31st) and Martin Dickie from the Constructed events and Tom Sorenson (22nd) and James Damore from the limited events. 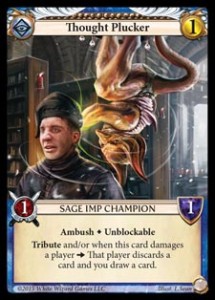 Thought Plucker was a frequent visitor to the top tables

Thomas Dixon was part of a team which became known as “Pluck You” due to their affinity of Thought Plucker. That card would be the basis of most of the constructed decks that won this summer. We didn’t believe that Plucker is overpowered, and still don’t, but it was clearly the favorite choice of players that came from other strategy card games. His team includes Rich Shay and Jonah Acosta. Jonah’s World Championship write-up talks about their planning and testing – they all had a hand in getting “The Ace” into the top 8.

Tom Sorenson has been writing about Epic all year long on his Tom’S Epic Gaming blog. His GenCon article is required reading for insights into the Random 60 format. He recently published his thoughts about his Worlds experience, including an article featuring his Pyrosaur deck and another article describing why Chamberlain Kark doesn’t scare him. Great stuff all the way around from one of Epic’s leading voices.

Following the summer convention season, we filled the ranks of Worlds from qualifier events in game stores and conventions around the world. Abdul Majid qualified from a bookshop in Cambridge in the United Kingdom. Multiple people were qualified from events at Star City Games in Virginia. Florida, Pennsylvania, Washington, New Jersey, and even Stockholm Sweden all sent representatives to the Epic World Championship.

We also invited several high-profile Star Realms and Magic the Gathering players to the event. This was not without some controversy, but we felt it would be a good way to both raise the profile of the event, as well as give something back to the gaming communities that helped to put Epic on the map in the first place. As it happened, the invited players on average performed slightly below average as compared to the other players at the event. (Grand Finalist Will Morgan posted a large write-up about Worlds, and he breaks down the math in that article.)

There were several dozen players who showed up to our World Championship without an invite, and they attempted to qualify through one of our twelve Last Chance Qualifiers. One of the last winners of an LCQ was Jonathan Lewis, someone who would go on to make Championship Monday. He lost in the semifinals to Grand Finalist Will Morgan… who happened to be his teammate! To go from LCQ competitor to Semifinalist (and winner of $5,000) is one amazing weekend!

“Amazing” would be the word we would use to describe the entire Wise Wizards Game Fair and the Epic World Championships. Other articles in this series will describe the rest of the event, and share more photos and videos from the event. The road to Epic Worlds 2017 begins soon, and we hope you will enjoy the look back at this journey as we prepare for the next one.