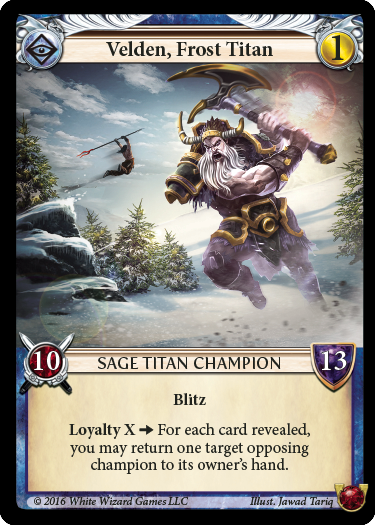 Blitz is a straightforward keyword in Epic: attack right now with this thing! But getting value out of your blitz champions, especially if they do not have breakthrough, can be difficult.

Behold Velden, Frost Titan. This nightmare from the north is a huge, scary problem for anyone in his path. Look at the size of him! His axe is as large as a chapel! While that human token (I assume) is bravely sacrificing himself for the greater good, his teammates are nowhere to be seen. Why? They’ve fled in absolute terror.

Returning opposing champions to their owner’s hand is a dangerous path to take. Most champions in constructed decks have a Tribute and/or a Loyalty effect that make replaying them a joy rather than a chore. However, returning several 1-cost champions can shift the tempo dramatically in your favor.

Resetting the board has been an option since the first Epic set with Time Walker. He returns all opposing champions with Loyalty 2… but he returns all of your other champions as well. Velden requires more Sage cards in your hand, but in return for that higher cost you get a back-breaking effect that only affects your opponent’s champions.

An unstated but powerful way to use this sort of effect is to attempt to return token champions to their owners’ hands. Since tokens cannot exist anywhere other than in play, they are put into the token pile when they would be returned. Sage has many ways to transform opposing champions into wolves: Transform, Elara, Lycomancer, and Wave of Transformation. Now it has another way to turn those wolves into … nothing at all.

In my testing, I paired him with 40+ other Sage cards. It was usually a 42/18 split, adding in twelve 1-cost Wild cards and three copies each of Lash and Rage to give breakthrough to Velden, Frost Giant, or Helion to punch through the ambush blockers my opponent would play to try to keep themselves in the game. I may have a bias towards Wild cards; others found success putting Velden at the top of a list of 60 Sage cards.

I will close today’s preview with another story from Ian Taylor, featuring Velden and tomorrow’s preview card, Gladius the Defender.

Knights of the Dawn were not supposed to ride this far from Covenant, but Gladius was old, grizzled, and cared nothing for the rules of his order.  Not when it would endanger the people of his home village.  Breaking the laws of the order usually resulted in banishment, but Gladius had a higher purpose and was not afraid of such petty edicts.

Yalun was a trade village that had sprung up at the base of a long mountain range that the locals called Pantheon.  Each of the frozen peaks was said to represent one of the gods of Danabrae.  The path was treacherous, and was usually avoided this time of year.

Except by frost titans.  It wasn’t often they would come down to the low land, but when they did, they caused havoc and strife.

Gladius had gathered a small militia at the northern gate of Yalun.  Elara, of the Forbidden Citadel, had warned Covenant that the frost titan Velden was coming.  Velden was a curious one, rarely leaving the peaks of Pantheon.  The decision was made to leave him be, but Gladius had to be certain of the mighty lord’s motivations.

The ground shook, heralding the arrival of the largest being that Gladius had ever seen up close.  Velden was the size of three buildings, and carried an axe that could easily split a cart in two.

The titan calmly walked to the north gate of the village.  With a curious look on the mighty blue features, he stopped.

“Frost lord,” said Gladius.  “State your business.  Are you friend, or foe?”

Velden gave a smirk.  A curious gesture on one so large, but the directness of the question amused him.

“I have no quarrel with you, or your kin,” boomed Velden.

“I must ask you to walk around the village,” said Gladius.

“I give no reason.”  Gladius had moved forward to confront the titan directly.  “I am the defender.”

“And what do you propose to do if I walk where I please?”

Gladius sheathed his sword and pulled his longbow.  Within seconds, he had an arrow nocked and aimed at the titan’s face.  “First one eye, frost lord, then the other.”

Gladius scowled but said nothing.  After a tense moment that felt like an hour, the titan suddenly moved.  He spun, and ducked, and swung his titan axe in an arc, catching a tree to the right of the gate, and hurling it from its roots.  The tree caught Gladius a glancing blow, knocking him of his horse.  Gladius hit the dirt hard.  He struggled to regain his composure, as he heard the titan stride over him.

“I have no wish to hurt you, defender.  Stay down, and I will pass.”

Gladius regained his feet, seeing Velden had already stepped past the gate, and into the village proper.  The ground shook, carts rattled, small thatched roofs started losing their straw.  The people looked to him, their defender.

“Stop!” yelled Gladius, and with that he nocked another arrow and fired.  The shard of wood struck the titan in the shoulder.  It seemed to cause no pain, but Velden turned to face the knight once more.  Another arrow had been aimed at his face.

“Knight,” said Velden.  “You have heard the stories of me?”

“Stories of me tend to be quite… graphic.  Are you not afraid?”

Velden considered this.  He respected bravery.  At least enough to not destroy it utterly.  Plus, it made sense to have somebody that perhaps owed him a favor.

“If you will allow me,” said the frost lord, “I would like to walk around your village.”

Gladius lowered his bow and stepped aside.  He was still wary of the titan’s motivation, but he was still a man of honor, and he would let the titan pass.

The footsteps had not quite receded when Gladius recovered his horse and mounted.  Wherever Velden’s journey lay, Covenant would have to be warned.

Velden is just one of the 48 all-new cards in Epic Uprising. What do you think of this mighty man with a mighty axe? Let us know on our Facebook page.