Scarros, Hound of Draka is the Wild champion with Loyalty X in our new set. 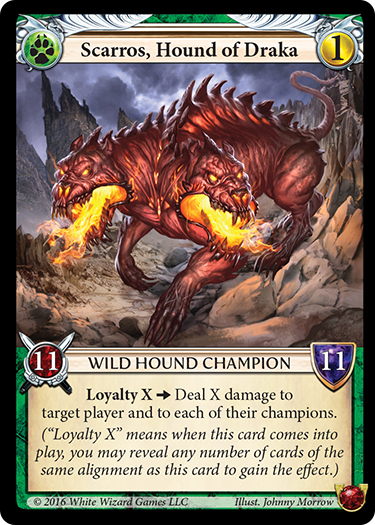 What hound could possibly be worthy of serving the mighty Draka? This hound.

Scarros will define Wild-based decks for a long time to come. He is a one-sided sweeper. Play him before combat to take out an army of tokens. Play him after combat to take out champions who blocked and survived. Play him with a hand full of Wild cards to make your opponent very, very unhappy.

Champions without ambush need to have a powerful effect to justify inclusion in my constructed deck. This certainly does qualify; hitting my opponent for some damage while putting a large champion on the board is a great play. Cleaning up tokens and other small-but-powerful champions like Muse and Thought Plucker is a welcome side benefit. He also served to cause Chamberlain Kark fits, by keeping my opponent’s health total in check.

The Forcemage stood at the edge of the great forest that dominated the Pasik valley.  Before him ran the Everblessed, the sacred river that protected the shining city of Convenant from the Blight of the desert wasteland the peasants called the Ahn-Het Forge. The Forge is where the demons spawned.  While the river flowed, they could not cross.

He stepped forward, looking for a safe place to ford, and steeling himself for the ordeal ahead, when he heard the unmistakable growl.

The Forcemage pulled back his cloak and turned. He had not expected to be interrupted. His unique talents had caused the denizens of the forest to give him a wide berth on his journey, but this was not to be a normal encounter.

“Good morning,” said Helion. His heart raced, but he did not show his fear to the two-headed firebreathing hound. This is the one the villagers called Scarros, an ancient word meaning ‘Fear.’ Two heads. Two minds.  This may be a challenge.

Scarros did not approach. Helion considered running for the safety of the Everblessed, but his brief probe of the mutated beast told him that’s what Scarros was waiting for.

Helion tried to push the hound away with his mind, but all he saw was darkness and corruption.  This was Raxxa’s influence. The Demon Lord had been attempting to poison Draka the Hunter with rift energy, presumably to turn the mighty dragon to his will. Draka’s mind was strong enough to resist the darkness, at least for a time, but the corruption had to go somewhere. The forest ran wild with mutations.

The villagers had told stories of the nightmares this created. Scarros was the worst of them.

Helion took a step towards his visitor. Scarros stepped back, having never experienced someone so small being so bold. Helion raised his hand to grab the mind of the mutated hound.  Their souls were fire. They burned together. Slowly, one of Scarros’ heads dipped, then the other.

The Forcemage approached, and put his hand on the scaly surface of the corrupted hound. His touch had a singular effect, however. Scarros howled and reared, slamming one of his heads into Helion’s torso, and sending the Forcemage flying. He landed hard next to the flowing river.

Through the haze of pain, he saw Scarros. The hound was not charging for the kill. Helion saw a shadow pass across the sun, and heard the familiar call of the mighty hunter. Draka called to Scarros, and Scarros obeyed.

“Another time, Hunter,” said the Forcemage, his ego bruised more than anything else.

Helion stood and brushed his robes, and tried to regain his dignity. This was not a setback. The mind of corruption is a tough puzzle, but now he had the key. He knew what he did wrong with Scarros, and he would not make the same mistake again. The demons of the Ahn-Het Forge would bow to his will, and then… the Forbidden Citadel would be his.

Scarros, Hound of Draka is just one of the 48 all-new cards in Epic Uprising, which makes its debut at Wise Wizard Games Fair 2016. Join us!