Here is a preview written by guest blogger Brad Minnigh. His preview begins with an introduction:

Well, first of all, let me say thank you for the opportunity to preview a card from the new set, Uprising! This is a wonderful opportunity and wonderful chance to give back to a game I’ve grown to love over the past year. I think I started playing Epic in April. It had been on my radar as I was a fan of Star Realms. I loved the art and the idea of the game. I believe I picked up a copy randomly to check it out with my friend and huge fan/Epic article specialist Josiah Fiscus. We both instantly fell in love with the game and have been heavily invested ever since. Josiah was good enough to qualify for Worlds even while I am still trying. I have a few more chances and hopefully I will succeed. If not, I will continue to support this game.

I am 31 years old, married with 2 kids, and I play a variety of board games/card games/video games. I am an avid boardgamegeek and have been very active on a number of game forums as well as a Senior Playtester and guest designer for the successful Summoner Wars card game by Plaid Hat Games. For Epic I have managed to organize 2 World Qualifiers at my local gaming store, and I look forward to partnering with them in the future for more events. 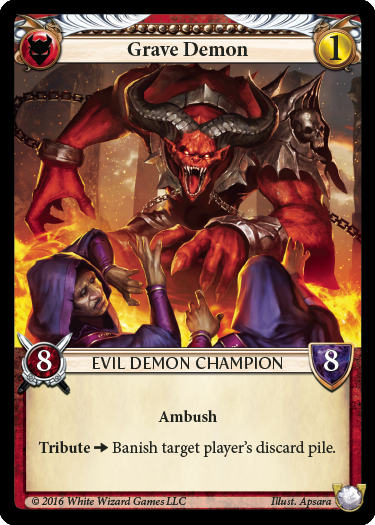 Today’s preview is Grave Demon. This cute and cuddly character hails from the much-maligned Evil alignment. As his name suggests, he is a Demon, which means he automatically gets a couple pluses in my book as I love themed decks, and my growing love for Demon decks will love this addition. As a Demon he benefits from surviving Raxxa’s Displeasure, and will obviously help support any Evil Loyalty requirements. As an 8/8 he will survive against a lot of attacks, and will definitely apply pressure if allowed to get through. However, his abilities are what get me excited.

He has Ambush, which is one of my favorite abilities. There is so much flexibility in having Ambush: You can block something big, play an establishing champion that can attack on your turn and force your opponent to spend gold, or play it to trigger Evil ally abilities. Great stuff. And if that wasn’t enough, he has a game-changing Tribute ability in banishing a target player’s discard pile. This is huge! There is so much utility in banishing a discard pile. Heck, you could banish your own that has Ancient Chant in there in order to draw a card! But let’s be honest, it’s usually much better to banish your opponent’s draw pile to remove their Recycle targets, as well as any other discard pile shenanigans like Soul Hunters or Psionic Assaults. I also can’t help but chuckle at the correlation between his name and his ability.

In constructed this guy could find a home in a lot of decks. He doesn’t require an Evil investment, so he could easily be splashed in any deck. A huge 8/8 Ambush body that acts as discard pile removal is unheard of. He will pretty much be included in any Evil deck because why not? 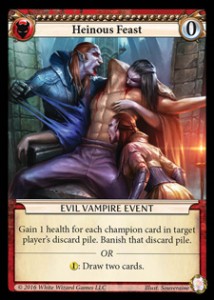 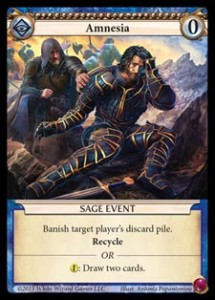 is becomes an auto pick for me in the Limited as well. For many of the same reasons above he doesn’t require Loyalty, he is an Ambushing establishing champion that has a lot of utility. His Tribute ability can win you games in Limited, however. There are very few discard pile manipulators in the game, and Heinous Feast and Amnesia are considered to be top 2 picks. This guy not only does that, but gives you a huge body to act in defense or offense. Expect to see this guy at Worlds.

Also, you gotta love the art. As a video game lover I can’t help but be inspired to play Diablo again just to face off against enemies similar to this guy. This is a beautiful addition to our already stellar array of Demon-esque card art. I for one can’t wait to get my hands on this card.

I hope you enjoyed this spoiler and enjoy the rest of the set like I’m sure I will.