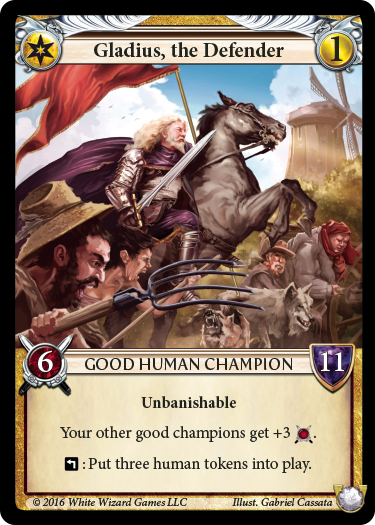 Today’s preview is Gladius, the Defender. A champion brave enough to stand in the face of a Titan, and live to tell the tale. (Read more about that in a story posted in yesterday’s preview for Velden, Frost Titan.)

First, the comparisons: a 6 offense, 11 defense champion that is unbanishable is a good defender, but he doesn’t have ambush. He has no ability to be a sudden blocker at all. He doesn’t have blitz, either, meaning the turn you play him you don’t get an attacker and you don’t draw any cards.

If a champion costs a gold, doesn’t have blitz, and doesn’t have ambush, and doesn’t draw any cards… there are very few of those in Epic and for good reason. Here is a list of those from the first two Epic sets, and most of them break or banish an opposing champion, or are a massive potential threat like Burrowing Wurm or Thundarus. Why should you consider playing with the Defender? Sometimes, the best defense is a good offense.

“Your other good champions get +3 offense.” It’s Epicmas, everyone! Presents for everybody!

Your human tokens just got a massive boost. Your righteous good champions (thanks, Gold Dragon) just became glorious. Your opponent’s health total just became less safe. And, if you don’t have anything else to do, you can turn him sideways and inspire three more humans to join your army!

There are many potential downsides to consider, though. If you don’t have anything else on the board, he is not a great play at all. And, while he can’t be banished and his 11 defense will let him escape the majority of Wild’s ways to break him, Evil will have no such problems. Playing this champion in your turn, before your opponent has spent their gold, is asking for very bad things to happen to you and your team.

However, let me go back to my prior comment. +3 offense is serious business; this is the largest general-purpose stat boost in the game. (Thundarus gives +5, but only to your dragons.)

In the competitive scene right now, human token decks are not making their presence felt. Will Gladius make the difference? Find out at the Epic World Championships, taking place at Wise Wizard Games Fair 2016 from November 18 through November 21.