Origins Game Fair starts today, and it’s now official that Wise Wizard Games will have the last two packs of Pantheon for sale! This is long-awaited and very exciting news. And what better way to celebrate this new release than with a card spoiler? 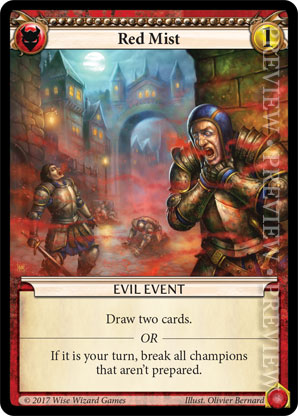 Each new Epic set is virtually obligated to contain a sweeper. This is important especially in limited formats in order to stay close to the current ratio. But I am continually impressed with the creativity shown by the design team in putting new twists on these obligatory sweeper cards. Red Mist is fantastic example of just such creativity.

As a 1-cost event with a draw 2 option, this is bound to be at least a mid-pack pick in limited. The worst case scenario for the card is still decent. As a constructed option, there is stiff competition in Evil sweepers, but this could still find a home as an answer to highly aggressive decks. Since Red Mist only breaks champions on your own turn and the first thing you do on your turn is to prepare all of your champions, you can ensure that Red Mist will leave your side untouched as long as you are willing to spend your gold first. Depending on the board state, this could be well worth it as it provides an option to stabilize a game where you were losing badly on board.

I initially had a bit of confusion as to the interactions of Red Mist with deploying champions and Blitz. However, the deploying status and Blitz ability have no bearing on whether or not the champion will be broken. All champions in play are always in exactly one of three states: Prepared, Expended, or Flipped. The deploying/deployed state is a totally separate category. If it helps, you can rephrase this card to say “If it is your turn, break all champions that are expended or flipped.” and it will have the same effect.

The obvious use case here is “kill all the guys my opponent just attacked me with”. But if you can have some patience on your turn and wait until your attacks are complete, you can get even more value out of this effect. If your opponent has any prepared blockers, you can attack into them knowing that if their champion flips to block, you will kill it too. And just the threat of a Red Mist may allow you to bluff your opponent into being afraid to block your champions at all, especially considering you won’t have spent your gold yet.

This is a guest blogpost by Josiah Fiscus. Josiah Fiscus is a 32-year-old gamer from Pittsburgh, PA who has been playing CCGs and designer board games for over two decades. When he’s not at the game table, you’ll find him playing drums and serving as a deacon in his local church or enjoying time outdoors with his wife, Erin, and two kids.