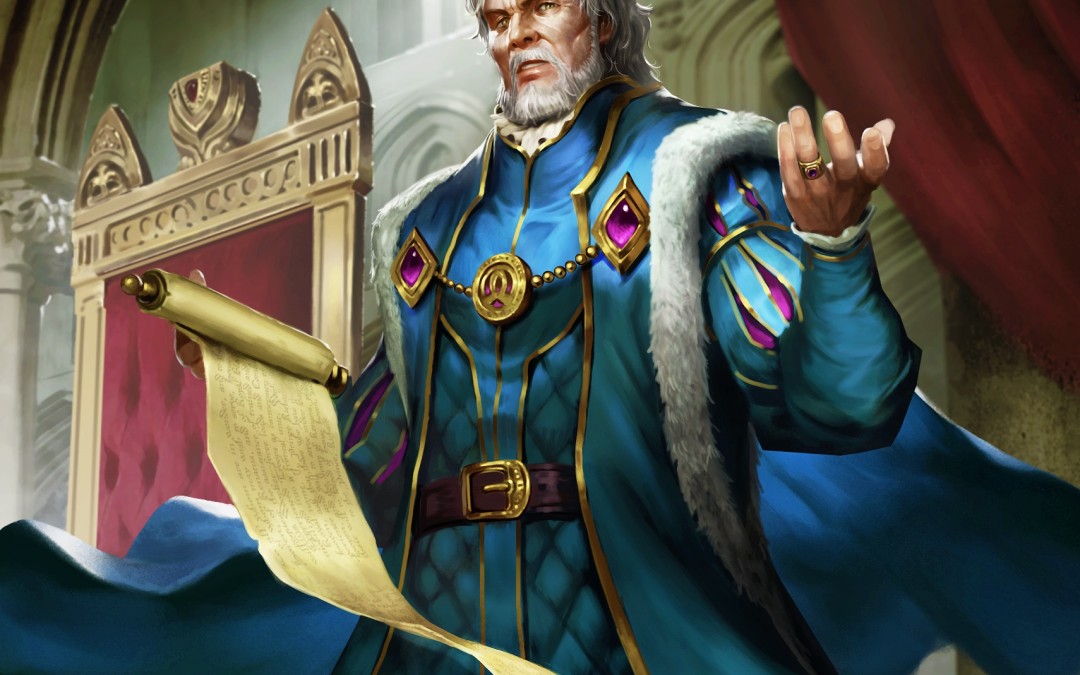 I reached out to several participants in the 2016 Epic World Championships, all of whom are leaders in the Epic online community, and I asked them all the same series of questions. There was a lot of similar answers, and quite a bit of dissent! This shows that there are few absolutes in Epic. 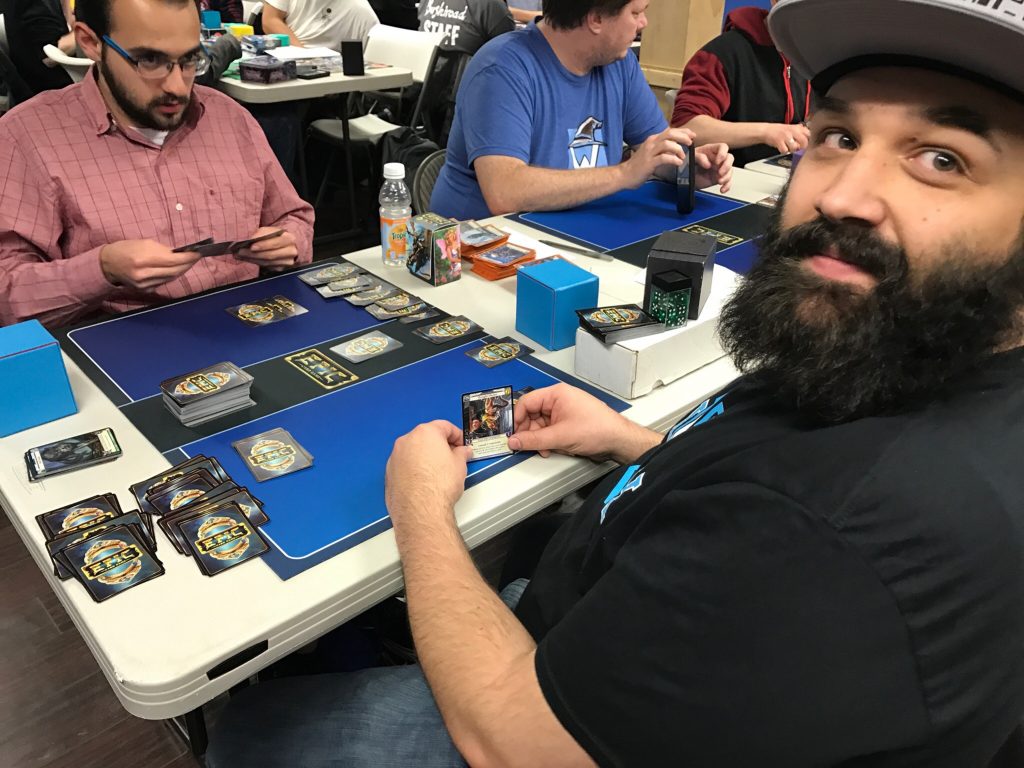 When you go to build a constructed deck, do you have a core of cards that you like to build around?

Thomas Dixon: Blind Faith and Drain Essence make most of my lists. Urgent Messengers typically accompanies Blind Faith and Guilt Demon with Drain Essence, but those are more moving parts than locked in pieces. I also try to include at least one Amnesia/Heinous Feast/Grave Demon/Erratic Research in my 60.

Jonah Acosta: I generally build decks with a starting base of Sage cards including, thought plucker, muse, ancient chant, lesson learned and Amnesia.

Nathan Overbay: Army of the Apocalypse and Smash and Burn. I love the Reset/Army decks with a ton of 0s with Blitz that are capable of Turn 1-2 wins. They also keep the opponent off balance and you usually stay ahead on gold. Smash and Burn is my favorite card. When it’s paired with Rage/Lash and the other free pump spells in the game it can get out of hand. Both of these are all-in strategies but if I feel the environment won’t punish me too much I like to play them. I played a version of my Smash and burn list at Worlds. I just cut down on the pump.

Tom Sorenson: I like to build around any cards/ideas that interest me, particularly if I or other players think those cards are bad. However, I most frequently put Wolf’s Bite and Guilt Demons into my decks.

John Tatian:  When I build a new constructed deck, it is usually based off of a couple of cards, so the rest of the deck is built around those cards to round the strategy out. I don’t have a core of cards that I put into every deck, though, and I don’t think there is any one card in Epic that should be played in every deck.

Derek Arnold: I gravitate towards Blind Faith and fit it into every deck if possible.

How much does the current meta affects your building decisions?

Jonah Acosta: A deck must be able to compete with the top decks which are currently Kark, Burn, Evil Sage control and Wild Sage Tempo

Nathan Overbay: The meta has some influence into what I feel comfortable bringing. For example now that Kark is a top deck in the meta I won’t be bringing a list more slanted to burn. If I was on an Aggro plan I’d pack more champions with breakthrough that don’t mind attacking together. Cards like Flame strike don’t stack up against things like Angel of Light and Inner Peace.

Thomas Sorenson: Significantly. Every deck I make needs to be able to answer Muse/Thought Plucker effectively. I need to be able to survive/beat burn decks. Must be able to beat Kark (although my decks generally do this already).

John Tatian: The current meta has a huge effect on deckbuilding decisions. Since all of the cards in Epic are so powerful, it’s easy to build a strong linear deck. Therefore, you’ve got to consider what decks other people are playing and build your deck to combat them.

Derek Arnold: I always consider the best cards, strategies, and decks in the current meta-game when building decks. Many of my decisions are driven by ideas of how to attack the most popular decks. However, the most influential force in my deck building decisions is ensuring the final list is fundamentally sound.

Thomas Dixon: Sage/Wild dictated a desire for healthgain, and Kark reinforces it. As long as people are on those 2 types of decks in large amounts, I feel obligated to play Kark with mirror breaking effects.

What is the most broken/overpowered/useful card in Epic Constructed right now?

Nathan Overbay: Amnesia is one of the most useful cards in the game. It’s good against any deck. Blind faith is also a card I try to go out of my way to play. I don’t think there are any OP cards currently. If there’s any card I’d like to see leave the format it’s probably Ceasefire. That card warps entire strategies. Cards like Thought Plucker are fine because there are so many ways to deal with it. Ceasefire warps how an Aggro deck can combat control, literally.

Tom Sorenson: I wouldn’t say there is a broken card in Epic Constructed right now. Muse is the most overpowered. Wolf’s Bite is the most useful because it efficiently breaks Muse/Thought Plucker, recycles, and gives you a chump blocker; it can also finish off damaged champion and/or enable Feeding Frenzy.

John Tatian: Ceasefire is the most broken card in Epic constructed in the current environment. In combination with strong zero cost defensive cards (such as Fumble and Brand, Rebel Fighter) it is extremely difficult to effective play around ceasefire. This allows decks to stay alive for a long time with relative ease; and from there, winning is somewhat trivial.

Thomas Dixon: Broken: Thought Plucker. That said, the card has been so defining of the metagame that people are now playing all of the things in the game that punish it.

Jonah Acosta: Nothing is broken, Kark is the only real alternative win condition, but people just need to learn how to play around it.

What, if anything, disqualifies a card from being constructed-worthy?

Thomas Sorenson: Champions that have no immediate impact (non-blitz, non-ambush, non-tribute, non-loyalty such as Burrowing Wurm). Cards with roles that are performed better by other cards.

John Tatian: There are cards in Epic that can affect the game in many different ways, and I wouldn’t disqualify any of these individual effects. However, I would disqualify a card that tries to do something and is just worse at doing that thing than another card (unless that particular thing is just really good and you want a lot of it, such as burn events in a burn deck).

Derek Arnold: Every card in Epic is good in the right situation and should be considered.

Thomas Dixon: Better efficiency from another existing card. Loyalty requirements or ally requirements make cards harder to include in many decks obviously, but constructed worthy has a wider meaning than many, including myself, initially thought. Priest of Kalnor was a card I had dismissed early, but has worked its way into a lot of decks.

Jonah Acosta: If a card does not have an immediate impact on the game or doesn’t replace itself I generally will not consider it for constructed.

Nathan Overbay: If a card can’t replace itself (by drawing a card or similar) or take out an opponent’s champion with 1 for 1 value it’s probably not playable. Examples being Trihorror and Burrowing Wurm. They are huge and warrant removal, sure, but they also lose a ton of value if they get Erased or something similar.

What’s the best piece of advice you can give about building an Epic constructed deck?

John Tatian: Play cards that work well together, and make sure that your deck has a plan against the most common strategies. Ideally, try to figure out how the other decks are winning and design your deck to specifically attack that.

Thomas Dixon: Understand what other people are doing. Just because you can do too amazing things doesn’t mean it’s going to be faster or or more resilient than what others are doing, we thought we broke the game so many times but have been disabused of that notion a lot. Have a plan for each of the key match ups.

Jonah Acosta: Play cards and decks you want to play or enjoy. It is better to be playing cards your comfortable with than just play the “best” deck

Thomas Sorenson: Run 20 0-cost cards with at least half of your deck being able to draw/recycle (recall counts as half a card for this).

Describe your play style for Epic Constructed in 3 or fewer words.

Nathan Overbay: It’s like you are asking me to say “Smash and Burn”

The experts have spoken! And they will continue to speak, because that’s what experts do.

Much thanks to our panel. For those interested, we have some links for you!

Thomas Dixon has a few more things to say

Thomas Sorenson interviews well here. He also has a blog.

For those interested, Tom Sorenson will be taking on 2016 World Champion John Tatian in a best of seven series. You can get details of that here.

If you enjoyed this article, would like to read more like this, or have an idea for something you would like us to cover, please let us know at support@wisewizardgames.com