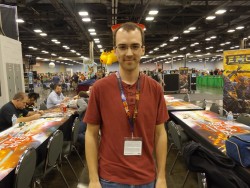 My name is Derek Arnold. I am twenty-seven years old and currently live in Cleveland, Ohio.

I started playing Epic Card Game in November of last year. My first strategy card game was Magic the Gathering which my brother taught me how to play when I was around nine years old.

I play Epic about once a week. My coworker and I get together occasionally to play and test our new constructed decks.

The deck I chose to play for the constructed tournament is a slow controlling deck that reacts to and answers what the opponent is doing early in the game and wins in the late game. I chose to play this deck for the tournament because I wanted to be prepared against what I felt were going to be the most popular decks. I also chose this deck because I wanted to play as many turns as possible to maximize my tournament game play experience. I was pleased with my deck’s performance, but there was room for improvement as three of my five matches during the Swiss portion of the event ended in a draw. If I were to use the deck again I would make several changes all of which would be for the purpose of speeding up the deck in order to finish rounds on time.

I was expecting players to play aggressive decks with a lot of human tokens or Wild cards with direct damage. Many of the cards in my deck were included mainly to not lose to an early swarm of tokens or direct damage. I also expected to play against decks utilizing the discard effects and ensured my deck had enough card draw to counter this strategy. My deck was designed to survive early against the aggressive decks and draw more cards than my opponent over the course of the game and setup a win in the late game.

One of the most important interactions in this deck is with Ancient Chant and Lesson Learned or Keeper of Secrets which allows you to draw four cards with a single gold. I was most concerned of facing the Wild Sage decks with Raging T-Rex and Juggernaut as they put a lot of pressure on the board and can also end the game with direct damage all while keeping up against my deck’s card drawing.

My plan for testing between now and Worlds is to meet more players in my local community and draft as often as possible. I’ll also continue to write on my blog called Epic Insights and interact with the online community to share thoughts and stay engaged. My goal is to continue to actively learn and play as much as possible improving my skills and knowledge in preparation for Worlds.

My advice for anyone trying to win an Epic World Championship Qualifier is to properly understand the rules and flow of the game. It can be especially helpful for anyone coming to Epic from other TCGs to approach the game with a fresh perspective and build your understanding from the ground up. A fundamentally sound understanding of the game is one of the greatest advantages you can have over your opponents.