This is a guest blogpost by KC Smithsen. KC Smithsen is a professional copywriter and editor-in-chief of The Pocket Players blog. He hosts the weekly Pocket Players Podcast on iTunes, covering news and reviews for all forms of portable gaming, including 3DS, Vita, mobile and compact tabletop games. KC organizes numerous gaming groups in New York, including Epic NYC for the Epic Card Game, as well as the official Castelia League for the Pokémon video games.

What’s really great about the Epic Card Game is that there are so many ways to play it. Sealed is a great casual format when you don’t want worry about building your deck. Constructed is amazing if you know other serious players and want to build their perfect strategy. But personally, nothing beats a good Draft Night for the best mix of strategy, surprises, and the ability to draw a lot of friends.

What I want to show you here is how easy and fun it can be to run your own Epic Pack or Cube Draft. Even if you’re more interested in playing constructed, you might run a Draft to attract new players to the game – players who just might become great Constructed rivals.

1) GET THE RIGHT TOOLS

So let’s start with everything you might need. Well, all you really need are enough cards. Three core sets will provide you with enough cards for eight to ten players, depending on how you plan things. The expansion and promo cards are completely optional, but if you have ‘em, they can bump your player cap up a bit. 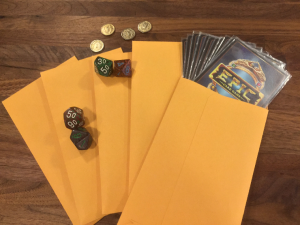 In addition to normal cards, don’t forget that you’ll probably need a lot of Champion Tokens for all the simultaneous games that will be going on. So print out a few extras from the Epic homepage – and don’t worry about making them look fancy if you haven’t made print & play cards before.

The last thing you’ll need are some life trackers and counters for all your players. Grabbing a fistful of 10- and 20-sided dice should suffice. Or you can tell your players to download the free Epic ScoreKeeper app.

Since you’ll be handing your cards off to several other people who may not share your sacred appreciation for card games, consider some cheap sleeves – the kind you can get 100 of for a dollar. I like these because they’re thin enough to still fit inside other, fancier sleeves, for players who like to add a little flair to their decks.

As for completely optional things I love having, I picked up a few packs of #6 Coin Envelopes. These work as amazing “packs” for the cards you hand out as they make a pretty solid fit (with or without sleeves). Plus, players are always compelled by the feeling of picking their packs and opening them up for the big reveal inside.

Finally, if you want to keep things organized, you might want to download a free tournament tracking app for your phone such as LEVERADE. Not only can they automatically generate a round-robin match schedule for the night (where every player duels every other player), they can also record wins and losses if you want to generate a rankings chart.

I could seriously write a whole separate article on how to pick a place and time for games, but here are the most important tidbits to consider.

First off, you’ll want to scout out a good location to host your event. This can be anyplace with comfortable seating, ample table space, and convenient accessibility (nearby parking, buses, food and restrooms). A game-friendly pub, school club room, or even the mall food court works.

When picking a time, forget about finding one perfect time that everyone you know can easily make. People’s lives are just too convoluted for that to happen without a miracle. So just do your best, take into account basic school/work schedules, and schedule it at least one to two weeks in advance. 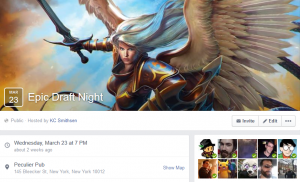 If you plan to run several events down the line, you can always tinker with the time and location to see what works best. But try to settle into a routine as soon as possible. You’ll get a lot more regular attendees once they automatically know where and when the group meets.

For organizational sake, I am extremely fond of making Facebook Events for my draft nights. It not only sends an automatic reminder to players, but it keeps a running tally of how many people to expect: Don’t forget you have a max number of players you can host! So start by inviting only a handful of friends, then open it to more people as you get an idea of who’s going and not.

Depending on how much time you want to spare on this, you can prepare your cards for a draft night in as few as 5 minutes, or a bit longer if you want to do something special.

The simplest option is the “Pile of Everything” approach. Just shuffle every card into one big pile and stick it in a box. DONE! If you have a bunch of expansions and promos, you can choose to dump them all into the mix, or selectively separate them out to keep the draft focused around just a particular set of cards (good for mixing things up between drafts).

The next step up in complexity is to remove all but one copy of each rare card in your pool (the ones with a red gem on the bottom-right corner). This makes those cards, well, rare! Not only is it fun to get hold of something unique in a draft, it assures that each player will be able to do a few things nobody else can.

Personally, I like to go even one step further and make full on “booster packs” to emulate the rarity distribution of a typical money sink CCG. To do this, you’ll need to keep your pile of singled-out rares separate from the commons. Then, use envelopes, rubber bands, or any other means of bundling cards to make packs of 10 or 12, each containing exactly one rare.

Whatever method you prefer, I suggest keeping count of how many cards are in your pool. This will inform you on how many players your draft can include. It’s also wise to do a recount of your cards the day after the draft, just to make sure nothing slipped under the table or got lost during play.

Now the fun can begin!

When your group has arrived, make sure everyone is sitting in a way that they each have an obvious “left” and “right” neighbor – preferably all sitting around one table. If you have 12 or more players, you’ll want to break them up into smaller groups that will only draft among themselves.

Now you can begin doling out the cards. If you went with the basic pile of cards approach, you can deal out 10 or 12 cards to each player (depending on the format and how many cards are in your pool). If you made packs, toss one out to each player. Give everyone a few seconds to review their hand, then instruct them to take one, place it face-down on the table, then pass the remaining cards to the player their left. They will repeat this until all those cards have been drafted. Then hand out another bundle of cards to each player and repeat the process, but this time passing unclaimed cards to the right. For the final set of cards, pass to the left again.

Try to synchronize the pace at which everybody passes cards. If you don’t, some people will inevitably stack four piles of cards next to their neighbor, who’s taking 15 minutes to plan a strategy before picking their first card. You can tell first-time players not to overthink things, and just stick to one or two colors if they’re indecisive. And remind them that even a completely random 30-card deck is almost always fully functional. 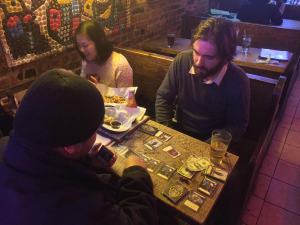 Now that everyone’s prepared to duel, you can pair them off any way you want. But a round-robin style works best for making sure your players socialize with as many other players as possible.

If you have an odd number of players, I recommend you take the first “rest” period (skip a match) in the schedule, especially if you have any new players. The first round of games is when you’ll be running around the most, answering questions and clarifying the rules at each table anyway.

Be sure to set a time limit on each match; about 30 minutes works well. I have some players that can turn this quick game into a 90-minute marathon. Epic is most fun when you have many new experiences, and battle a variety of decks, so keep things moving even if you have to decide a match based on who has the most Life at the buzzer.

That’s pretty much every tip and trick I can think of for a new draft organizer to know. But remember that there are so many ways to spin the formula and make your own unique variations. Try playing with Hydra or Emperor rules; play with teams; or let players trade for 10 minutes before each match.

This article is only meant as a guide for getting you started. Epic is designed to be your own customizable card experience, so have fun experiencing it however you want!